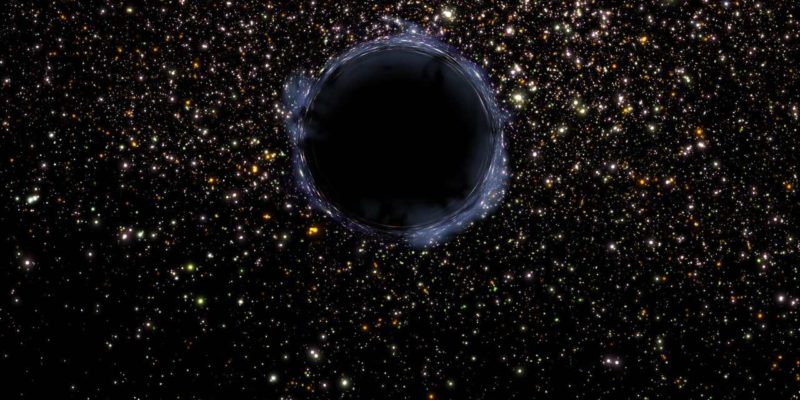 
If you step into the event horizon of a black hole, will you ever get out? According to a series of new calculations that just solved a 50-year-old problem that even Stephen Hawking couldn’t solve, the answer is yes.

It is being described as a historical calculation, the most important thing that has happened in the field since the work of the famous British physicist established the problem in the first place.

Since the 1970s, physicists have been grappling with a logical contradiction in the calculations surrounding a black hole called “black hole information paradox. “

Hawking would use his “semi-classical” quantum / general relativity hybrid explanation of the physics of a black hole to describe what happens to matter in and around it.

He discovered that quantum uncertainty causes small amounts of radiation to emanate from a black hole called “Hawking radiation.” This eventually causes it to lose mass and evaporate into nothingness. If the black hole loses mass and eventually disappears, then what falls must appear again somewhere. The question is: where / how / why does the information escape?

The authors of the new calculations, including UC Santa Barbara scientists have discovered additional effects allowed by general relativity but not included by Hawking, describing a strange situation in which information falling into a black hole will eventually come out, and that this phenomenon occurs at the same time. time, and is partially to blame for the evaporation of a black hole.

The way it works is through quantum entanglement, a phenomenon that simply means that particles of matter can bond at the quantum level and show patterns and reactivity with each other even though they could be thousands of miles apart.

Don Page, a physicist at the University of Alberta, was a graduate student whose studies on black holes were key in helping his adviser, Stephen Hawking, realize that black holes emit radiation. In 1980, Page broke with Hawking and argued that information must be released or preserved in black holes, causing a schism among physicists at the time.

RELATED: The biggest explosion since ‘the Big Bang’ creates a black hole that science says should not exist

Page would go on to establish a timeline of the lifespan of a black hole, in the shape of an inverted V known as “page time” or the “page curve,” and he described how information falling into the black hole would escape. through the radiation emitted by Hawking. until the black hole no longer existed. This was called “entanglement entropy,” and it prepared physicists for a 30-year period to make a resounding calculation.

“Over the past two years, physicists have shown that the entanglement entropy of black holes actually follows the Page curve, indicating that information is coming out,” explains George Musser writing for Quanta Magazine.

The slam dunk was started in October 2018 by Ahmed Almheiri at the Institute for Advanced Study when he used quantum computing to create a universe in which a simple black hole system located at the center of space began emitting radiation according to the theory of Hawking.

MORE: New ‘unprecedented’ photos of the Sun’s surface hailed as a landmark achievement for science

Everything inside the extreme quantum surface is not part of the black hole, but rather a collection of entangled particles that no longer contribute to the entropy of the system. Furthermore, the innermost particles of the simulated black hole also separated from the black hole, forming what Almheiri called “the island.”

At this point, non-entangled radiation begins to be emitted and the black hole disappears on its own.

By showing that the entanglement entropy of black holes followed the Page curve, Almheiri and his friends confirmed that black holes do indeed release information, although it appears in such a mess that it looks like an encrypted password.

At this point, if one’s brain continues to function after all this, Almheiri’s research astonishingly includes theoretical tools that would allow researchers to “decipher” the entangled and jumbled particles on the extreme quantum surface and discover what they are and where they come from. .

Last year, after solving a 50-year riddle and testing Page’s life’s work, the team decided to focus on the mysterious “island” of particles that were in the black hole, but not “del.” The island is part of the radiation, but it has not been blown off or transferred to the extreme surface.

READ: Star-Gazer reveals stunning images of space it takes from its backyard

This disconnect is theorized to be part of the reason black holes go down the other side of the Page curve, and if solving the black hole information paradox seemed difficult, Musser described the mystery island problem as prompting the team to “look out into the distance, momentarily speechless.”

SHARE this breakthrough with your friends on social media …

After Disease Forced Acclaimed Pianist to Stop Playing, a Designer Made Him Gloves That Brought Them Back to Life