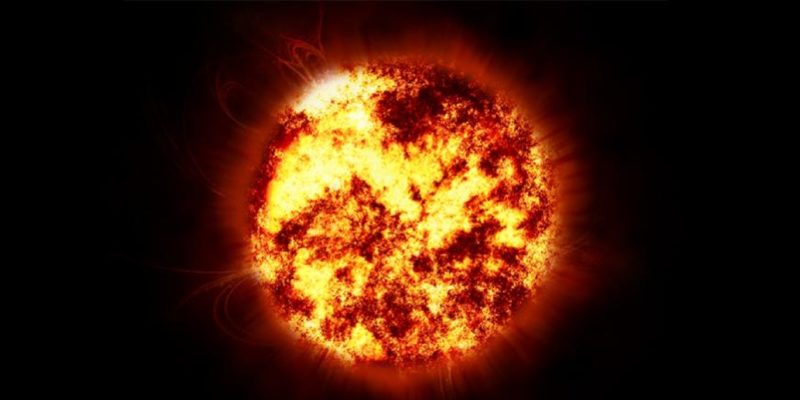 
Dark energy, the mysterious force that makes the universe speed up, may have been responsible for the unexpected results of the XENON1T experiment, far below the Apennines of Italy.

A new study, led by researchers at the University of Cambridge and published in the journal Physical review D, suggests that some unexplained results from the XENON1T experiment in Italy may have been caused by dark energy, and not by the dark matter that the experiment was designed to detect.

They built a physical model to help explain the results, which may have originated from dark energy particles produced in a region of the Sun with strong magnetic fields, although future experiments will be required to confirm this explanation. The researchers say their study could be an important step toward direct detection of dark energy.

Everything our eyes can see in the skies and in our everyday world, from tiny moons to massive galaxies, from ants to blue whales, makes up less than five percent of the universe. The rest is dark. About 27% is dark matter, the invisible force that holds galaxies and the cosmic web together, while 68% is dark energy, causing the universe to expand at an accelerating rate.

“Even though both components are invisible, we know much more about dark matter, as its existence was suggested as early as the 1920s, while dark energy was not discovered until 1998,” said Dr. Sunny Vagnozzi of the Kavli Institute of Cosmology, Cambridge, the first author of the article. “Large-scale experiments like XENON1T have been designed to directly detect dark matter, looking for signs that dark matter ‘hits’ ordinary matter, but dark energy is even more elusive.”

To detect dark energy, scientists generally look for gravitational interactions – the way objects are pulled by gravity. And on the larger scales, the gravitational effect of dark energy is repulsive, pulling things away from each other and accelerating the expansion of the universe.

PLUS: Astronomers detect light behind a black hole for the first time, proving Einstein is right again

About a year ago, the XENON1T experiment reported an unexpected signal, or excess, over the expected background. “These kinds of excesses are often flukes, but from time to time they can also lead to fundamental discoveries,” said co-author Dr. Luca Visinelli of the Frascati National Laboratories in Italy. “We explored a model in which this signal could be attributed to dark energy, rather than the dark matter for which the experiment was originally designed.”

At the time, the most popular explanation for the excess was axions, hypothetical extremely light particles, produced in the Sun. However, this explanation does not stand up to observations, as the number of axions that would be required to explain the XENON1T signal would drastically alter the evolution of stars much heavier than the Sun, in conflict with what we observe.

We are far from fully understanding what dark energy is, but most physical models for dark energy would lead to the existence of the so-called fifth force. There are four fundamental forces in the universe, and anything that cannot be explained by one of these forces is sometimes called the result of an unknown fifth force.

However, we know that Einstein’s theory of gravity works very well in the local universe. Therefore, any fifth force associated with dark energy is unwanted and must be hidden, or filtered, when it comes to small scales, and can only operate on the largest scales where Einstein’s theory of gravity fails to explain the acceleration of the Universe. To hide the fifth force, many dark energy models are equipped with so-called filtering mechanisms, which dynamically hide the fifth force.

Vagnozzi and his co-authors built a physical model, which used a type of detection mechanism known as chameleon detection, to show that dark energy particles produced in the Sun’s strong magnetic fields could explain the excess XENON1T.

“Our chameleon screening stops the production of dark energy particles in very dense objects, avoiding the problems faced by solar axions,” said Vagnozzi. “It also allows us to decouple what happens in the local very dense Universe from what happens on the larger scales, where the density is extremely low.”

The researchers used their model to show what would happen to the detector if dark energy were produced in a region of the Sun called the tachocline, where magnetic fields are particularly strong.

“It was really surprising that this excess could, in principle, have been caused by dark energy rather than dark matter,” he said. Vagnozzi from the study results. “When things fit together like this, it’s really special.”

Their calculations suggest that experiments like XENON1T, which are designed to detect dark matter, could also be used to detect dark energy. However, the original excess has yet to be convincingly confirmed. “We must first know that this was not just a fluke,” Visinelli said. “If XENON1T really saw something, I would expect to see a similar excess again in future experiments, but this time with a much stronger signal.”

If the excess was the result of dark energy, upcoming updates to the XENON1T experiment, as well as experiments pursuing similar goals like LUX-Zeplin and PandaX-xT, mean that it might be possible to directly detect dark energy in the next decade.

3 Effective Ways To Enforce Boundaries Without Stress And Anxiety