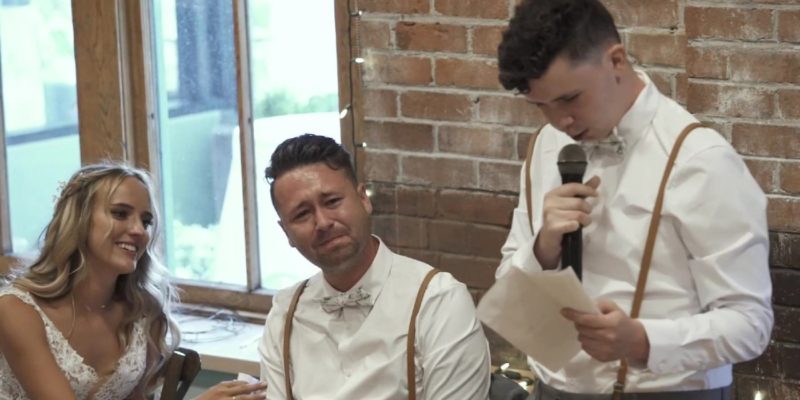 
This is the “speech of the best man of all time”, given by the brother of the boyfriend who struggles socially but who made everyone cry.

Sam Waldron, 23, announced to a crowd that his older brother, Jonah Waldron, 27, is his “hero” and “never looked down on me.”

Sam talks about how he has autism, which can be scary to interact with people, but his brother reminds him that “being different is a real strength, not a weakness.”

He says that Jonah’s new wife, Madison Waldron, 25, has “all the ingredients to be a great sister,” and jokes that she has married the “second most handsome Waldron.”

Sam says: “I was very nervous before the speech. Before I got up, I wasn’t sure if everyone would like my speech, but I felt more comfortable when I started reading.

“I felt like I was talking to anyone who has autism and that I was speaking out for the autism community.”

RELATED: ‘Let’s do it’: Alzheimer’s patient asks his wife to marry him after falling in love a second time

As for boyfriend Jonah, seeing his little brother do such a brilliant job, he couldn’t hold back the tears of happiness.

Brothers Sam and Jonah grew up together and, only four years apart, went to the same school.

Sam was diagnosed with autism when he was seven years old and he did not find it easy in intense social settings.

Jonah said, “He would come to see me during the school day, he would come for help with a subject or as a break.

“My parents and I were the ones with whom he felt most comfortable talking about the struggles he had socially.

Doting older brother Jonah was even inspired to train as a special education teacher to help other children with special needs.

The couple got engaged on July 23 during a trip to Colorado. Of course, Jonah asked Sam to be his best man as soon as they got home.

“I always knew I wanted Sam as my best man,” Jonah said.

“He was very happy, but you could also see that he was nervous as well.”

PLUS: Watch the photographer stumble upon the marriage proposal at sunset and excitedly give amazing photos to the couple

For Sam, “I felt like my dream came true … I was able to be close to my best brother.”

Sam spent two full days perfecting his speech before the big day arrived on July 3 of this year.

“I would sit there and read it out loud,” he said. “I read it to my Aunt Colleen, Andrew Hoyt and my dad many times.”

Sam stood in front of the 170 wedding guests to deliver his speech.

Jonah said, “My favorite part was when I was explaining to Maddy that she gave him peace, because that’s exactly how I would explain the way that she is with Sam.

After he finished, Sam received a standing ovation and the newlyweds were quick to tell him what a great job he did.

The full speech was recorded and uploaded to Jonah’s TikTok account and went viral, with more than 6.2 million views and 760,000 likes. Thank you Sam for inspiring so many with your emotional speech.

(LOOK the video below.)

SAY “I accept” to this sweet story: share it with your friends …