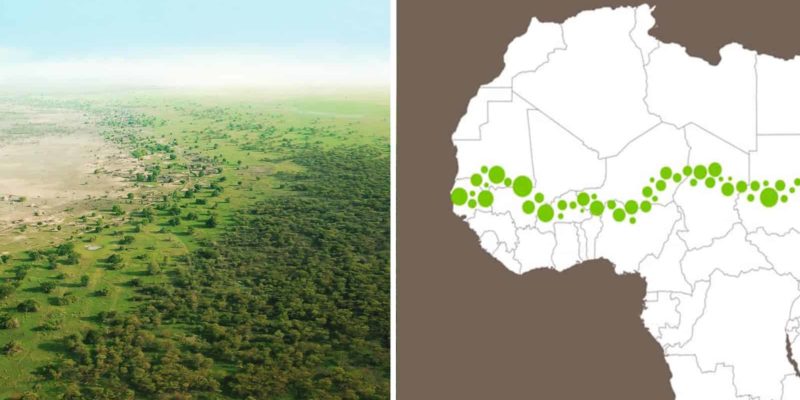 Africa’s Great Green Wall will stretch 8,000 km across the continent, creating jobs and providing food security for millions of people. Since the initiative came to life in 2007, workers have completed about 15% of the wall. Natural wonder restores rapid degradation landscapes in africa, creating a better environment for everyone along the way.

The wall provides a solution to many urgent problems facing the world, namely climate change, drought, hunger and migration. Once the wall is finished, it will measure three times the size of the Great Barrier Reef. The wall will then become the largest living structure in the world.

About the Great Green Wall project in Africa

The Great Green Wall It started in the Sahel region of Africa, at the southern tip of the Sahara desert. Millions of people here live in poverty and face the devastating impacts of climate change. Due to global warming, the area experiences frequent droughts, food insecurity, conflicts over scarce resources, and massive migration to Europe. However, because of the wall, the communities here have a reason to stay.

Now, abundant life arises from the creation of the wall, improving the well-being and stability of people. With the wall come jobs, food security and a better quality of life for millions. The wall’s creators say the impacts are far-reaching. It goes beyond the people of the Sahel region: it symbolizes that humanity can heal the Earth together.

While climate change affects us all, we can choose to work with nature to lessen the consequences. If nature can grow back in places as arid as the Sahel, it shows that we can overcome adversity everywhere. The wall is a beacon of hope for humanity, a reminder of how we need nature to survive.

The wall will support the lives of generations to come, helping communities not only survive, but thrive. Last month, the wall initiative received millions of dollars to help its completion.

Funding for the Great Green Wall in Africa will help achieve sustainability goals.

The Great Green Wall Initiative for the Sahel and Sahara (GGW) recently received at least $ 14,326 million in additional funding. French President Emmanuel Macron announced the news after the virtual ‘One Plant Summit for Biodiversity’ held in Paris on January 11. The Great Green Wall Accelerator provides 30 percent of the $ 33 billion needed to complete the wall by 2030. Major funders include the French government, the World Bank and the African Development Bank.

“Mobilizing this additional funding will contribute to achieving the goals of the Great Green Wall,” said Mohamed Cheikh El-Ghazouani, President of Mauritania and Chairman of the Conference of Heads of State and Government of the Pan-African Agency for the Great Green. . Wall.

The Great Green Wall makes an important contribution to the UN Sustainable Development Goals (known as the SDGs). These 17 goals created by the governments of the world aim to eradicate poverty and inequality, creating well-being for all.

If you want to give this movement power and voice, you can share the page on social media. Plus, you can sign a pledge that will help them lobby governments or donate directly. here.

The natural wonder in africa It has come a long way.

The initiative started in 2007, and originally involved 11 African countries. The wall provides an ecological barrier along the southern Sahara desert from the Atlantic coast to the Red Sea. In the 1970s, the region was once full of life and greenery. However, population growth, poor land management and climate change transformed the oasis into an arid landscape.

Fast forward to 2019, and nine more countries decided to join the movement to save Africa. Volunteers planted drought-resistant acacia trees across the continent. A couple of years ago, the wall was only 15% complete, but it had had a lasting impact in participating countries. In Nigeria, more than 12 million acres of barren land have been restored; In Senegal, 30 million acacias have been planted. A staggering 37 million acres of land have also been restored in Ethiopia, a remarkable achievement.

“The Great Green Wall is an inspiring example of ecosystem restoration in action,” he said. Susan gardner, Director of the Ecosystems Division of the United Nations Environment Program. “It is fast becoming a green growth corridor that is generating investment, boosting food security, creating jobs and sowing the seeds of peace.”

While the pandemic has created financial challenges for Africa, the ‘accelerator of the wall’ will keep the project on track.

Ghazouani said he would,

“Allow our countries, in accessing the necessary funds, to increase local investments within the framework of the five pillars adopted and strengthen the capacities of the national agencies of the Great Green Wall.”

“Recovering from a pandemic is our opportunity to change course. With smart policies and the right investments, we can chart a path that brings health to all, revitalizes economies and builds resilience. Innovations in energy and transport can lead to sustainable recovery and economic and social transformation. Nature-based solutions, such as the Great Green Wall of Africa, are promising, ”said António Guterres, UN Secretary-General.

Final Thoughts: The Great Green Wall in Africa will ensure the well-being of millions

This ambitious project in Africa shows the world what can happen when we work with nature rather than against it. With the completion of the wall, it will contribute to many of the UN’s sustainability goals. The wall will also provide jobs, natural wonder in africaand improving the life of the communities along its path. Hopefully, the massive movement will inspire other similar projects around the world.