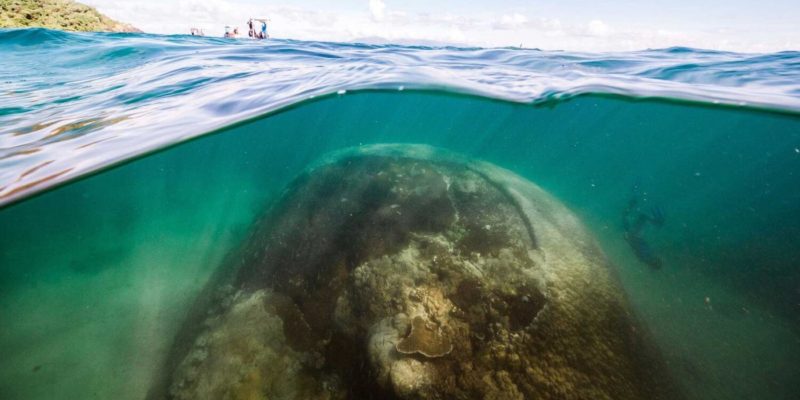 The widest and perhaps oldest individual coral on the Great Barrier Reef has been discovered and is in excellent health.

Those are the findings of a new article published in Nature who reported on the discovery of Muga dhambi, or “great coral” in the language of the Manbarra people, the traditional custodians of the Palm Islands, from where the research team found the coral.

Discovered near Goolboodi (Orpheus Island) in March 2021, the hemispherical Muga dhambi measured 5.3 meters high (17 feet) and 10.4 meters wide (34 feet), making it the widest coral and sixth highest of the 2,900 reefs that make up the barrier. system.

“We were conducting a citizen science workshop … and we were interested in exploring the north shore of Goolbodhi, which is a very remote area often restricted by climate,” said Kaillash Cook, part of the workshop team and co-author of the new article. World in general in an email.

“It was here that Dr. Adam Smith found this impressive coral and instantly assigned people to take measurements, studies and coordinates of the coral.”

Belonging to the genus Porites, Muga dhambi belongs to one of 16 common coral species that make up some of the largest and most important building blocks of near-shore corals, Adam Smith and the rest of the team behind the research report.

However, after consulting with the tribal elders, it was determined that the coral was completely unknown to the people of Manbarra, who were asked to give it a name, as it resided in their sea country.

Other huge Porites they have been found in American Samoa, on the reef around Green Island off the coast of Taiwan, and on Sesoko Island, Okinawa.

Based on annual growth models, Muga dhambi was estimated to be between 421 and 438 years old, a staggering age to live amid an ecosystem described as a canary in a coal mine because of climate change.

PLUS: Mussels can help filter microplastics from our oceans without harming mollusks

“For shallow-water corals, 438-year-old corals are very hard to come by,” admitted Cook. “The Australian Institute of Marine Sciences has investigated 328 colonies of Porites corals in the Great Barrier Reef and the oldest they have found is 436 years old. “

“While age is currently an estimate based on measurements from other corals, we can safely say that Muga dhambi is one of the oldest structures on the Great Barrier Reef,” Cook said.

“After a few torrid years, the Long-term monitoring program 2020-2021 The Great Barrier Reef has found that while COVID was rampant above, the reef pandemic itself, coral bleaching, was barely noticeable, and hard coral cover increased in all three reef regions over the past year.

CHECK: 5 experiments that show that invertebrates are much more aware than we think

A review of environmental events that have occurred in the past 450 years indicates that Muga dhambi may have survived up to 80 major cyclones and centuries of exposure to invasive species, perhaps 100 coral bleaching events, low tides, and human activity.

The researchers report that Muga dhambi is in very good health, with 70% living coral, the rest covered with the boring green sponge. Cliona viridis, grass algae and green algae.

PLUS: Mussels can help filter microplastics from our oceans without harming mollusks

“We found that around 30% of the colony was dead, which is a completely natural and healthy fact, as it supported the growth of grass algae, turtle algae, and sponges, all of which play an important role in the ecosystem.” Cook said. “This diversity of benthos meant that many fish were attracted to hide in the coral structure, feed on the algae in the grass and turn Muga dhambi into a thriving microecosystem.”

“This field note provides important geospatial, environmental and cultural information on a rare coral that can be monitored, appreciated, potentially restored, and hopefully inspire future generations to take better care of our reefs and our culture,” the authors write. proudly in the studio.

SHARE the good news from Down Under on social media …

Often by Hand, Scientists Work to Turn the Tide of Oyster and Seagrass Decline in Chesapeake Bay

3 Positive Ways To Curb Bad Behavior In Children Without Punishment