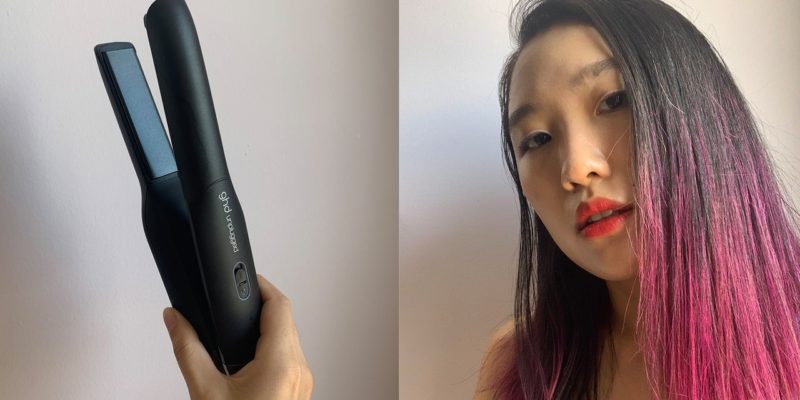 As someone who throws her hair into a ponytail almost every day for work, I need a lot of convincing in order to add a hot tool to my low-maintenance routine. One of my biggest pet peeves is the amount of clutter all of my blow-dryers, flatirons, and curling wands create, especially when it comes to the long cords that get tangled with my laptop, lamp, and cell phone charger cords. (I live in a New York City apartment with a pea-sized bathroom, so my work desk is also my vanity and bathroom counter space.) So, when I found out that GHD was about to launch its first-ever cordless styler, my ears perked up immediately.

You really need to hold this baby in your hands because I was floored by its portability after years of using clunky irons with even clunkier cords. It weighs just 300 grams (or two-thirds of a pound) — as a reference point, Unplugged is 35 percent lighter than the Best of Beauty-winning GHD Platinum+ Straightener. Richard Gregory, head of mechanical engineering at GHD, tells Allure that the lab teams over in Cambridge, England, went through eight development iterations and over 560,000 hours of testing in order to land on the version you can buy, starting today, for $299.

Like all GHD tools, Unplugged delivers consistent, even 365 degrees Fahrenheit (or 85 degrees Celsius) heating, which the brand says is the optimal temperature for all hair types, via its proprietary dual-zone technology (two heat sensors, one on each plate, to monitor temperature) and advanced lithium batteries. GHD’s lab results have shown that higher temperatures will damage your hair’s cortex and cause irreversible texture changes, while lower temperatures aren’t able to hold styles in place. In conjunction with its smooth, high-gloss plates, you won’t experience any snagging as you gently pull the styler through your hair. (Spoiler alert: I tested it and found this to be true.)

For peace of mind, safety measures include a slide switch to prevent accidentally turning the device on while it’s situated in your bag, a heat-resistant carrying case, and sleep mode, which automatically kicks in after three minutes of non-use. As someone who’s paranoid about buttons being unknowingly pressed, the switch is a smart touch.

Like me, hairstylist Cherin Choi is a big fan of cordless tools (i.e. her clippers), which she says create “physical freedom” rather than an “extra level of coordination” you have to implement when using tools connected to the wall. The convenience factor is undeniable, though she notes that it’s important to stay on top of charging. Gregory says that Unplugged provides 20 minutes of continuous styling and takes around two hours (or 80 minutes to reach 80 percent battery) to fully charge with the provided USB-C cable. Keep in mind that the Unplugged is meant for on-the-go styling, like a quick touch-up in the car.

What went right: a milestone for lab-grown meat, plus more positive news