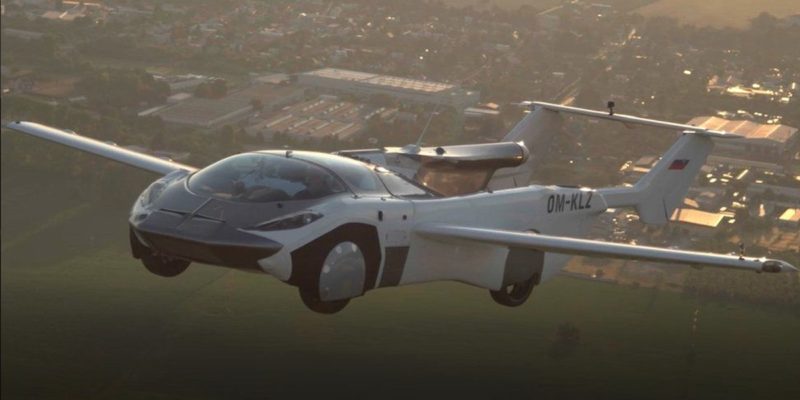 
Let the bells ring in all directions from Toledo to Tokyo. Flying cars, the sci-fi writers’ vision of transportation, may finally be landing in the modern world.

On a test flight, a Slovakian pilot drove what appeared to be an exotic sports car down a runway in the city of Nitra.

It then took flight with the help of a fixed propeller and landed 35 minutes later in Bratislava, before folding its wings and driving straight onto the highway.

The aptly named AirCar (prototype 1) was developed by a company called KleinVision, founded by Stefan Klein, who spent 20 years making his dream come true. For an incredibly small amount of money, around 2 million euros, the Slovak created the world’s first flying car to travel between two airports.

Once the flying portion of your journey is over, pressing the button produces a Transformer-like sequence that in less than three minutes leaves the vehicle looking like a slightly oversized, perfectly road-legal sports car with an engine. 160-horsepower gasoline BMW, a passenger seat, and a convertible top.

To be certified to fly according to modern regulations, airplanes or helicopters must be safe to fly for many years, without having an incident.

“I have to admit that (the AirCar) looks really cool, but I have a hundred questions about certification,” said Dr. Stephen Wright, an avionics researcher at the Univ. Of the West of England, told the BBC. “I can’t wait to see the piece of paper that says it’s safe to fly and sell.”

One company was certified for a flying car this year. Terrafugia, founded in 2006 by five MIT engineering graduates, first flew his flying car, the Transition, at a New York airport in Plattsburgh in 2012. With its own parachute and a flight range of about 480 miles, Terrafugia took deposits on pre-orders of 100 vehicles, with a retail price of about a quarter of a million dollars. each.

After years of product delays and customer deposit refunds, Terrafugia was bought in 2017 by a Chinese company. But, in January, they announced that the Transition had finally received a Special Light Sport Aircraft (LSA) certificate of airworthiness from the US Federal Aviation Administration.

The problem is, that flying car cannot be driven, because it has not proven its suitability for the road through various crash tests. By February 2021, Terrafugia had laid off most of its employees and said it would shut down its Massachusetts operations, intending to move to China.

At least they showed that it is possible to receive FAA certification in the US.

Klein’s vision has specified that They are looking to take a share of the aircraft market with AirCar, not the car market, and Morgan Stanley estimates that the flying car market in the next 20 years will be worth more than a trillion dollars, similar to the rumor that emerged. around the recent boom in private space flights.

Klein Vision is looking to upgrade its prototype engine with more power, allowing it a top cruising speed of 186 miles per hour, while other companies such as Hyundai, Toyotaand VW are looking for their own flying cars.

14 Triggers That Could Cause Someone to Binge Eat