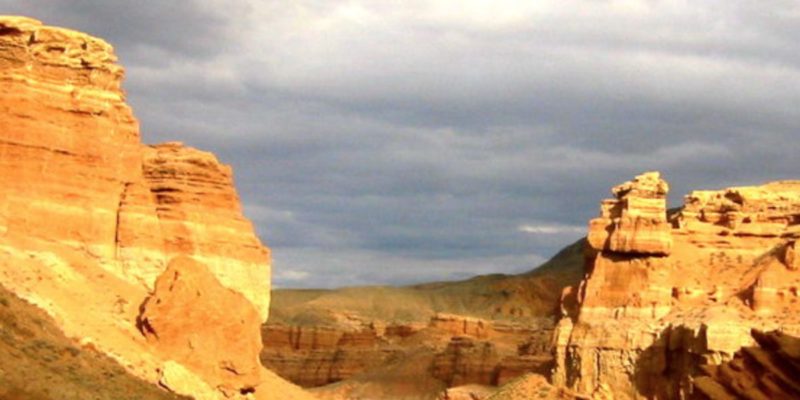 
Information preserved within a sedimentary cliff over 260 feet high provides the missing link to understanding changes in global climate over the past five million years.

An international team of researchers, led by the Max Planck Institute for Chemistry in Germany, has managed to reconstruct the changes in precipitation and their effects by studying the Charyn Canyon in southeastern Kazakhstan in Central Asia.

“The 80-meter-thick sedimentary sequence that we found provides us with a virtually continuous record of five million years of climate change. This is a very rare occurrence on land, ”explained paleo researcher Charlotte Prud’homme.

The alternating layers of dust and soil provide the first reliable evidence, in one place, of long-term interactions between the major climate systems of the Eurasian continent.

“Over the past five million years, the land surfaces of Eurasia appear to have contributed more actively to the land-atmosphere-ocean water cycle than previously recognized. The sediments conserved in Charyn Canyon acted as a litmus test for the influx of freshwater into the Arctic Ocean, stimulating the transport of moist air masses from the North Atlantic to land via western airflows, ”he says. the corresponding author Prud’homme.

The researchers focused their research on the Pliocene period five to 2.6 million years ago, which represents the best analog of the climatic conditions of the Anthropocene: this geological time period was the last time that the concentration of carbon dioxide in the atmosphere was comparable. to the present, around 400 parts per million (ppm).

“This is why our knowledge of the Charyn Canyon sediments is so essential to understanding the future climate,” says Prud’homme.

Until now, little was known about the role Central Asia plays in the evolution of global climate in the past and present. The evolution of the Earth’s climate over the past five million years has been understood primarily from the perspective of marine mechanisms. Rather, the importance of climate feedback that originated on land, rather than oceans, lakes, or ice cores, has remained largely unexplored. The international research team has filled this gap with their field research at Charyn Canyon.

The geographic location of the study site in central Central Asia was of key importance to the team.

“We needed to find a place that was inland and as far from the ocean as possible,” explained Kathryn Fitzsimmons of the Terrestrial Paleoclimate Reconstruction Research Group at the Max Planck Institute for Chemistry. “We could hardly find a more continental situation than in Charyn Canyon in southeastern Kazakhstan.” The canyon’s semi-arid climate and landscape were shaped by the interaction between mid-latitude westerly winds and high-latitude polar fronts, and by sediments carried from the nearby Tien Shan Mountains, making it ideal for studying across long term. Term earth-climate feedback mechanisms.

The researchers examined the 80-meter-thick sedimentary succession and rappelled samples to ensure continuous coverage of the record. By measuring the relative concentrations of isotopes within the carbonates in the soil, they reconstructed the changing availability of moisture in the soil over time. A combination of paleomagnetic analysis and absolute uranium-lead dating of the soil carbonates established the age and accumulation rates of the sediment record. Soil samples revealed a region characterized by increasing aridity over the past five million years. In the early Pliocene, the soil was significantly more humid than in later times or the current climate. However, this aridification process was not linear; it was interrupted by short-term climatic fluctuations that provide information on the interaction between the mid-latitude westerly winds and the Siberian high-pressure system.

RELATED: First U.S. farmer to sequester carbon for cash in a private market earns $ 115,000 for his planting strategy

“We are confident that the changes in soil moisture that we found at our site can also be used as an indicator of the activity of the Siberian river further north.”

One particular phase in which this link is important is highlighted: a sustained period of wet conditions in Charyn Canyon just before the first great global ice age about 3.3 million years ago. These humid conditions likely extended to the northern Siberian rivers, whose freshwater outflow into the Arctic Ocean may have passed a tipping point for widespread sea ice formation.

Their results have now been published in the scientific journal Earth and Environment Communications, a terrestrial climate archive for five million years that provides a valuable basis for future climate models.

Prud’homme literally said: “We have opened a door.”

RAPPEL this story to Eco-Friends on social media …

Making Noodles Is an Art That’s Fun to Master