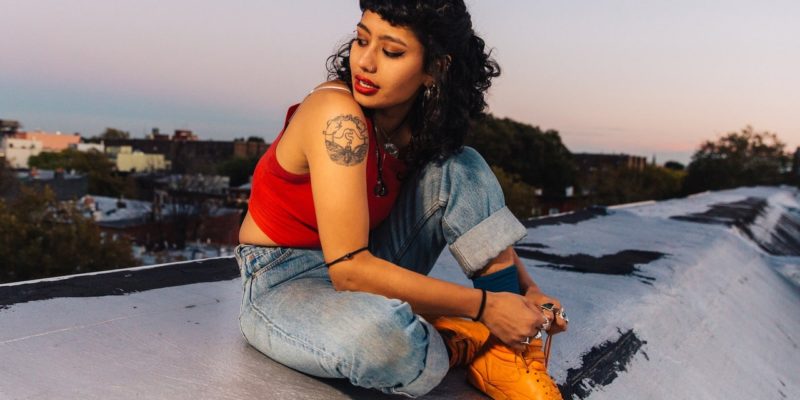 If your artist used plastic wrap to protect your tattoo, you can remove it after a couple of hours. For those with a clear bandage, like Saniderm, follow your artist’s guidelines as many have different suggestions. Wei, for example, says you can leave it on for three to five days, while Fergus usually recommends taking it off after 24 to 48 hours. During this time, excess blood, ink, and plasma may pool up underneath the film — it’s totally normal, Ariel W. says. Be sure to peel it off slowly with clean hands.

After taking off both bandages, aftercare is about the same. Wash off the tattoo with mild, antibacterial soap, like Dr. Bronner’s Baby Unscented Pure Castile Soap, and lukewarm water. Let it air dry if you can, or pat it dry with a clean paper towel, Wei says.

From there, Fergus recommends not moisturizing it for a day, but other artists, like Kang, may tell you to smooth on a thin layer of a healing ointment, like Aquaphor, two to three times a day for three days. After that, you can swap it out for an unscented, dye-free, lightweight body lotion, such as the Aveeno Daily Moisturizing Lotion or Lubriderm Daily Moisture Lotion, and apply it just as often for two weeks. Garner also is a fan of unscented shea butter. (Allure editors swear by Eu’Genia’s.) “I just feel like it’s been working better for me for healing,” she says. “Because the shea butter is kind of oily, the tattoo still looks moisturized even when it’s peeling.”

While it’s healing, don’t pick, scratch, or itch your tattoo — even if it’s flaking, Wei says. Also, avoid submerging your tattoo, so stay out of pools, hot tubs, and any bodies of water for two weeks. Don’t expose your tattoo to the sun either. “Once it is completely healed, please use sunscreen to protect the tattoo and reduce the effects of the sun,” she adds.

From there, keep open communication with your artist if any issues arise. Otherwise, enjoy your new body art. We have a feeling you’ll want a second tattoo soon enough. At least when the time comes, you’ll be a seasoned veteran.

Now, watch someone get their first tattoo:

The Best of Muscle for Life: Mini-Cuts and Bulks, the Science of Hypertrophy, and 48 Laws of Power