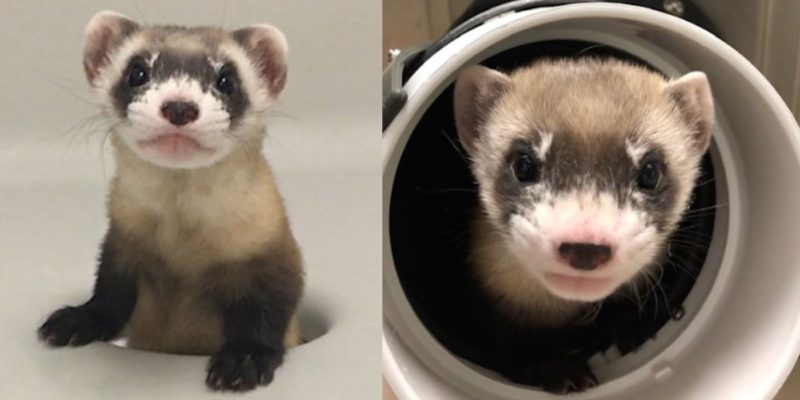 
Recovery efforts for the black-footed ferret aimed at increasing genetic diversity and disease resistance took a bold step on December 10, 2020, with the birth of “Elizabeth Ann,” created from the frozen cells of a black-footed ferret that lived more than 30 years ago.

The pioneering effort to explore solutions to help recover this endangered species is the result of an innovative partnership between the U.S. Fish and Wildlife Service and scientists at Revive & Restore, ViaGen Pets & Equine, San Diego Zoo Global and the Association of Zoos and Aquariums.

“The Service sought the expertise of valued recovery partners to help us explore how we could overcome the genetic limitations that make it difficult for the black-footed ferret to recover, and we are proud to make this announcement today,” said Noreen Walsh, Director of Service’s Mountain – Prairie Region, where the Service’s National Black-footed Ferret Conservation Center is located.

“Although this research is preliminary, it is the first cloning of an endangered native species in North America and provides a promising tool for ongoing efforts to conserve the black-footed ferret.”

“Successful genetic cloning does not diminish the importance of addressing habitat-based threats to the species or the Service’s focus on addressing habitat conservation and management to retrieve black-footed ferrets,” Walsh continued.

Today, all black-footed ferrets are descended from seven individuals, creating unique genetic challenges to recovering this species. Cloning can help address problems of genetic diversity and resistance to disease in wild populations. Without an adequate amount of genetic diversity, a species often becomes more susceptible to diseases and genetic abnormalities, as well as limited adaptability to conditions in the wild and a decreased fertility rate.

Once thought to be extinct and currently listed as an endangered species, the Service and its partners recovered black-legged ferrets from nearly disappearing for good after a Wyoming rancher discovered a small population in their land in 1981. Ferrets from this population were captured by the Wyoming Game and Fish Department and others to begin a captive breeding program to recover the species.

CLOCK: ‘Is working!’ From bobcats to bears, Utah’s first wildlife bridge is a success, and there’s a video to prove it

‘Willa’, a black-footed ferret captured among the last wild individuals, has no living descendants and is therefore not one of the seven founders. The Wyoming Game and Fish Department had the foresight to preserve her genes and sent tissue samples from Willa to the San Diego Zoo Global Frozen Zoo in 1988. The Frozen Zoo established cell culture and managed these precious frozen cells ever since, making today’s achievement possible.

A victory for biodiversity

“The San Diego Zoo Global Frozen Zoo was created more than 40 years ago in the hope that it will provide solutions to future conservation challenges,” said Oliver Ryder, its director of Conservation Genetics. “We are delighted to have been able to create a cryogenic bank and, years later, provide viable cell cultures for this innovative project.”

LOOK: Rescued dog helps save endangered whales by sniffing their poop like a conservation canine

A genomic study revealed that Willa’s genome had three times more unique variations than the living population. Therefore, if Elizabeth Ann successfully mates and reproduces, she could provide a unique genetic diversity to the species.

“We’ve come a long way since 2013 when we began funding, permitting, design and development for this project with the US Fish and Wildlife Service,” said Ryan Phelan, CEO of Revive & Restore. “But it was the commitment to see this species survive that has led to the successful birth of Elizabeth Ann. Seeing her thrive now marks the beginning of a new era for her species and for species dependent on conservation everywhere. She is a victory for biodiversity and genetic rescue ”.

In 2018, the Service issued the first recovery permit for research into the cloning of an endangered species, allowing Revive & Restore to initiate genetic analyzes and proofs of concept. This work builds on recent advancements in cloning processes developed by ViaGen Pets & Equine, which successfully created embryos from the frozen cell line and implanted them into a domestic surrogate ferret.

Mid-gestation, the surrogate mother was transferred from ViaGen Pets & Equine to the Service’s National Black-footed Ferret Conservation Center to give birth to the cloned kit under the Service’s authority. The extensive experience of NBFFCC staff in breeding and caring for black-footed ferrets ensured the safe arrival of the first clone of the endangered species from the US.

Researchers continue to closely monitor the young kit and Elizabeth Ann and her surrogate mother are kept separate from other breeding black-legged ferrets. You will live your life at the Center as additional investigations are completed. The team is working to produce more black-footed ferret clones in the coming months as part of ongoing research efforts.

(Source: US Fish and Wildlife Service)

How Cork Packaging Could Affect the Beauty Industry’s Carbon Footprint