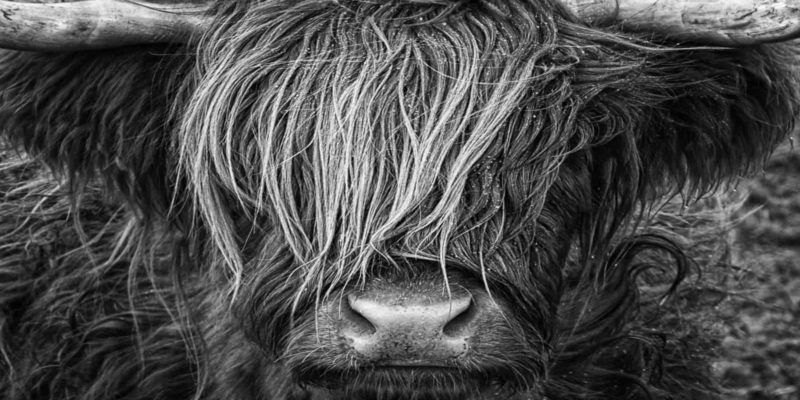 
Most people find companionship in dogs or cats, but a farmer calls two highland cows his best friends. When you run a farm, you naturally end up befriending the animals in your care. By spending so much time with them, you begin to bond as you would with an indoor pet.

Hamish and Kyloe, two Scottish Highland cows, live in the scenic Blue Ridge Mountains in Virginia. With plenty of room to roam, these happy cows enjoy relaxing and natural surroundings at Thistle Do Farm. Marc Stewart runs the farm and takes care of the beloved cows, considering them part of his family.

“You know, it sounds a bit silly, but when you have a dog or a cat, you bring them into your life,” says Marc. “When you have a cow as a pet, it’s the opposite; you have to enter yours and have it not only accept you but love you, and that’s the most amazing thing. “

He also owns other animals such as chickens, pigs, horses, dogs, and goats. Marc likes to have so many animal friends around him, and caring for them comes naturally to him.

“Most of my adult life, I worked with animals. I was a veterinary technician for a while, I worked for animal control, I trained search and rescue dogs for quite some time, but I had never had cows before, ”says Marc.

He never planned to have cows. However, her mother’s fascination with Scotland, where Kyloe and Hamish are, stuck with her. Growing up, he began to develop a keen interest in the country and its wildlife.

“My sister and I had the opportunity to go to Scotland for ten days, and that’s where I saw my first Highland cow,” Marc explained.

That trip inspired him to source his highland cows, Kyloe and Hamish.

“I got Hamish about nine years ago; a farmer who knew he was preparing to retire. He called me one day and said, ‘Hey, I have a calf for more than 10 months. You want it?'”

Marc didn’t have to think twice. He went to the farmer’s house a week later to pick up Hamish. Marc said he got the other Kyloe cow when Hamish was around four years old.

“Kyloe was probably three years old at the time. They are only six months apart in age, despite their difference in size, “said Marc.

They also have unique personalities. Hamish used to act naughty at times, jumping the fence and wandering the neighborhood at night. He just wanted to find something or someone to play with before Kyloe arrived. Marc started looking for a partner for Hamish.

“So, I started looking around; I found a guy, I made him an offer, he obviously took it, “Marc explained.” My main goal was to keep Hamish out of trouble, but the Highland I chose, I never imagined would end up being more of a problem than Hamish. “

Although cows are a handful at times, Marc couldn’t imagine life without them now. He shares a special bond with all their animalsBut nothing compares to the ratio of his highland cows.

“I think the most rewarding thing about having these guys is being allowed to be a part of your life.”

In a YouTube video of him with one of his highland cows, he says that he has always been an outdoor dude. He had a couple of horses growing up, which taught him a lot about caring for farm animals. His father also took him camping quite a bit, sparking a deep love and appreciation for nature.

However, when Marc grew up, his jobs and responsibilities took him away from farming life for a time. He had no cattle or horses for about thirty years because he had no room for them. However, when his wife got pregnant and the couple realized that they would need more space. That’s when he founded Thistle Do Farm, the last 15 remaining acres of what was once a 400-acre farm.

They now live comfortably in a 3,000-square-foot farmhouse, enjoying the quiet of the countryside. They decided to get a couple of rescue horses first, but didn’t consider the cows until later. After Marc’s trip to Scotland, he came up with the idea. After seeing highland cows for the first time there, he knew he would eventually have one.

Little did he know where that dream would take him. He and his wife now have many different farm animals and have plans to open a sanctuary. After obtaining their cows from the highlands, they realized that most cows have a very different destiny. Cows raised on commercial farms are killed or euthanized if they are not up to the task.

On smaller farms, cows that are born prematurely or have injuries may have a similar fate. Farmers may not have the money to relocate or care for these animals. So, Thistle Do Farm now plans to become a non-profit organization to bring in injured, sick or unwanted animals. If you want to donate to their cause or read more about their mission, you can do so here.

Marc Stewart never thought that one day he would have a great sanctuary with so many different farm animals. Now, he wants nothing more than to save animals that do not have a loving home. He hopes to turn his small farm into a non-profit organization where animals can live their lives in peace. Marc has been an animal lover all his life and wants to help everyone he can.

His two highland cows, Kyloe and Hamish, have shown him the incredible bond between man and cows. They are not only farm animals. In fact, they are loving pets that deserve a safe home. Marc’s relationship with his cows has touched the lives of thousands of people around the world.