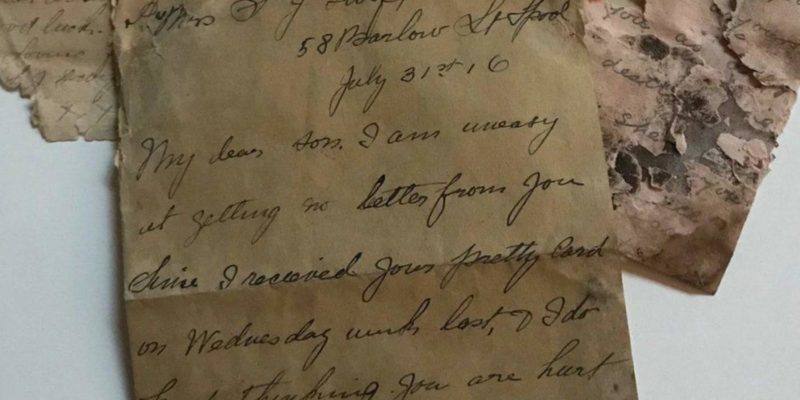 
When it comes to communication, the Internet offers instant gratification. By their very nature, handwritten letters are more permanent. The cards create a tangible connection to the people, places, and events of the past. Ironically, when the links in that chain break, it seems the easiest way to repair them is with the quick tools on the World Wide Web.

William Swift, a native of Liverpool, enlisted at the beginning of World War I in 1914. He and his brothers-in-arms of the King’s Royal Lancaster Regiment were sent to France in 1916. After participating in the Battle of the Somme, the 19 years old, Swift perished in the Battle of Arras.

But Swift inadvertently left something behind while stationed at Noeux-les Mines after the Battle of the Somme.

During building renovations more than a century later, a schoolmaster unearthed letters from his family to Swift; they were found under the floorboards of the soldier’s old billet.

The letters were brought into the care of Mathilde Bernardet, a historian at the Memorial 14-18 museum at Notre Dame De Lorette.

As reported by the BBCBernardet classified the moving missives as “simple letters, sent by parents who care about their child. The letters are full of support. The mother says that she misses her son, that she hopes that he will do well, that he stays well and that she trusts him … He is full of real love ”.

Hearing the poignant ending to Lance Corporal’s story, Bernardet and his colleagues set out to find Swift’s living relatives and return the correspondence to their family.

However, the search for Swift’s relatives proved more difficult than anticipated. Months of investigation yielded no clues.

With the traditional media exhausted, the historian took the search to social networks. The results of his Facebook request for pertinent information were, if not instantaneous, quite close.

“In less than four hours, the post had been shared thousands of times and we had [found] some connections with the family, ”Bernardet told the BBC.

Corporal William Swift may not have returned to Liverpool all those years ago, but thanks to the efforts of a determined historian and the timely help of the internet, his letters will, and that long broken chain connecting the past, the present, and the future is now restored for generations to come.

SHARE this sweet story of finding a family with friends …

What went right this week: a win for cargo bikes, plus more positive news