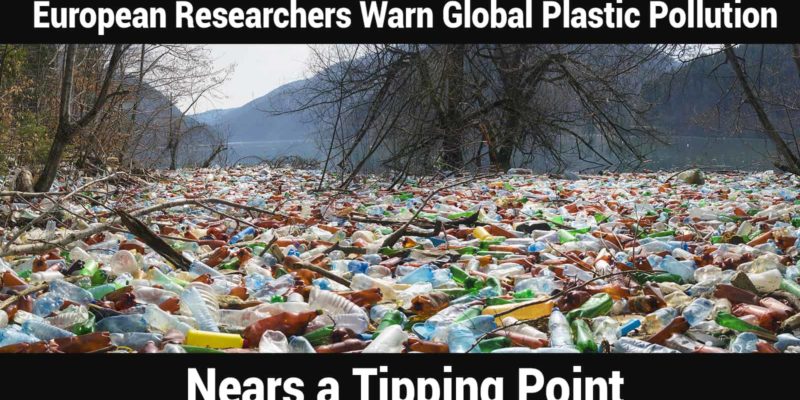 
A new study reveals that the plastic pollution crisis may be reaching a global tipping point. In the study, the researchers show that if plastic emissions continue unabated, they can trigger irreversible effects. To avoid a catastrophe, radical reforms are required by global governments and legislators.

Sadly, even the most pristine environments have been flooded with plastic. Now you can find it in every corner of the planet, even in Antarctic sea ice! No habitat or ecosystem remains without plastic in our modern world. Scientists have studied the adverse effects of plastic for years and continue to warn humanity of its consequences. Unfortunately, most of your concerns fall on deaf ears.

In 2016, global emissions of plastic in the world’s lakes, rivers and oceans ranged from 9 to 23 million metric tons per year. Scientists believe that similar amounts are emitted annually on land. By 2025, researchers estimate that plastic pollution will nearly double if we don’t control our appetite for plastic.

The authors call plastic pollution a “global threat,” encouraging actions to dramatically reduce plastic emissions. This would mean stopping or greatly reducing the consumption of plastic, as well as providing viable and environmentally friendly alternatives. Researchers from Sweden, Norway and Germany published the new study on July 2 in Sciences.

“Plastic is deeply ingrained in our society and seeps into the environment everywhere, even in countries with good waste management infrastructure,” says Matthew MacLeod, professor at Stockholm University and lead author of the study. He adds that emissions continue to rise despite increased public and scientific awareness of the dangers of plastic pollution.

Plastic is good for business, but it is a death sentence for the environment.

However, for his co-author, Mine Tekman, a Ph.D. candidate at the Alfred Wegener Institute in Germany, this is not a surprise. She says that politics and economics play a huge role in the problem of plastic pollution. The discrepancy makes sense because businesses require infinite growth and virtually every business needs plastic to survive. Unfortunately, the environment pays a heavy price for our myopia.

Tekman says that the current solutions to plastic pollution as recycling and cleaning technologies hardly make a dent. They are just a band-aid for a genuine environmental threat that is at its tipping point. He added that to control the damage, we must get to the source of the problem. As we said before, much of it is due to poor policymaking and, to put it bluntly, greed.

“The world promotes technological solutions for recycling and eliminating plastic from the environment. As consumers, we believe that when we properly separate our plastic garbage, everything will magically be recycled. Technologically, plastic recycling has many limitations, and countries with good infrastructure have been exporting their plastic waste to countries with worse facilities. Reducing emissions requires drastic actions, such as limiting the production of virgin plastic to increase the value of recycled plastic and prohibiting the export of plastic waste unless it is to a country with better recycling, “says Tekman.

Our appetite for plastic affects even remote regions of the world

When people recycle, they feel like they have done something good for the environment. However, as Tekman said, most recycling ends up in third world countries with poor recycling facilities. This means that many of the recycled materials end up in landfills or in the environment along with garbage.

If cleanup efforts and natural green processes cannot remove all pollution, emissions accumulate in the environment. This occurs through a multi-step process called weathering.

“Plastic erosion occurs due to many different processes, and we have come a long way to understand them. But the weather constantly changes the properties of plastic pollution, which opens new doors to more questions, ”says Hans Peter Arp, a researcher at the Norwegian Geotechnical Institute (NGI) and professor at the Norwegian University of Science and Technology (NTNU), who is also a co-author of the study. “Degradation is very slow and not effective in stopping build-up, so exposure to degraded plastic will only increase,” says Arp.

Therefore, it qualifies plastic as a “poorly reversible pollutant” due to its constant emissions and environmental presence. Unfortunately, remote environments are often the hardest hit by the onslaught. Co-author Annika Jahnke, a researcher at the Helmholtz Center for Environmental Research (UFZ) and a professor at RWTH Aachen University, explains the following:

“In remote settings, plastic debris cannot be removed by clean-ups, and the weathering of large plastic items will inevitably result in the generation of large amounts of plastic micro- and nanoparticles, as well as the leaching of chemicals that were intentionally added. to plastic and other chemicals that break the backbone of the plastic polymer. Therefore, plastic in the environment is a constantly moving target of increasing complexity and mobility. Where it accumulates and what effects it can cause is challenging or perhaps even impossible to predict. “

Plastic pollution already causes immense environmental damage on its own by killing marine life and releasing toxins. However, it can also exacerbate other environmental stressors in remote regions of the world, possibly triggering tipping points. The new research lists some hypothetical examples of these effects:

In conclusion, the authors say that plastic emissions can trigger global and irreversible tipping points in the environment. They hope the study will provide “compelling motivation” for world leaders to work together to combat plastic pollution.

“Right now, we are loading the environment with ever-increasing amounts of poorly reversible plastic pollution. So far, we don’t see widespread evidence of bad consequences, but if plastic in the open has a really bad effect, we probably can’t reverse it, ”MacLeod cautions. “The cost of ignoring the accumulation of persistent plastic pollution in the environment could be enormous. The most rational thing is to act as quickly as possible to reduce plastic emissions to the environment ”.