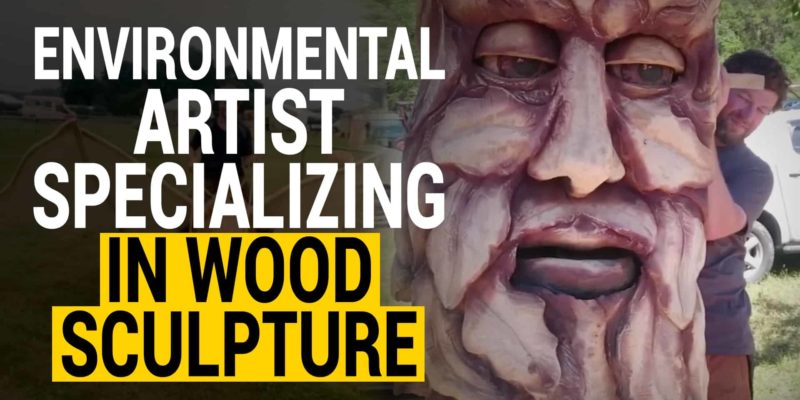 
Simon O’Rourke, an ecologist from North Wales, UK, carves impressive wooden sculptures of trees. Create intricate wooden masterpieces using little more than a chainsaw and your imagination. To date, he has cut out hundreds of sculptures, from wild animals to people, fairies, and even furniture. Below, we’ll share Simon’s story of how he got involved in this exciting line of work and what inspires him to keep going.

While Simon now has a successful business creating wood sculptures, it didn’t come overnight. It took him a few detours to realize his unique path in life. However, he learned a lot about himself and what he wanted out of life along the way.

Of course, publishing children’s books didn’t keep the lights on, so she needed a full-time job while building her illustration career. So, he took a job as a tree surgeon or arborist, where he learned about trees firsthand. His responsibilities included the maintenance, felling and planting of new trees.

Little did he know that this work would help him later in his wood carving work. As he had to work with power tools such as chainsaws, this gave him essential knowledge and skills for sculpting trees. Also, being near the trees made him comfortable with the process of sculpting the wood.

When he wasn’t working at his full-time job, he spent time developing his portfolio of illustrations. Fortunately, their hard work paid off. He received a commission for a children’s book from a client who worked in trees; the book was published in the United States. While he felt excited and accomplished, something was still missing. He was no longer devoted to illustration, but realized that he could use his creativity with the chainsaw. The wood sculpture began to call him by name, and he could no longer ignore his soul’s desire.

“It was a lightbulb moment once when I saw someone carve with the chainsaw, and I was very excited,” he recalls. “I wanted to give it a try, so I went straight back to the patio where our tree surgery base was and decided to practice.”

From that moment, Simon knew that he had found the calling of his life: carving wood.

The creation of wooden sculptures just resonated with his soul and it came naturally to him.

“I love the fact that you can create so much beauty with such a violent tool,” says Simon, “and that’s really what got me going.”

He started carving with Acorn Furniture for two years and started his own business in 2005. A few years later, his wood carving companies have taken him around the world. He has traveled to the US, Japan, Canada, the Netherlands, Germany, and Denmark to compete in chainsaw carving competitions. In many of the competitions, Simon won prizes for his incredible sculptures.

He draws inspiration from both himself and his clients, turning a wooden stump into art. It’s amazing what your imagination comes up with and how seemingly there are no limits to what you can create.

Some of his sculptures have even appeared in movies and TV shows! In fact, the Game of Thrones producers asked Simon to design something around an accessory from the series’ story. He chose to create dragon eggs and a new coffin for them and said it took about three days to make them.

He has created other works of art, including a giant wooden lighthouse for a museum, a rustic wooden table, and even a bridge over a small canal. He has also made wooden sculptures of fairies, dragons, gnomes, dogs, lions, eagles, owls and other animals.

He loves to sculpt a variety of characters, but humans are his favorites.

“But I think what inspires me the most is the human form and what it can convey by simply changing expression or pose, or changing texture, and that really excites me,” says Simon. “I love the kind of idea that you can completely alter the message of something just by raising a hand, raising an eyebrow, curling your lip … things like that, so that’s really what inspires me.”

While he greatly enjoys sharing his passion with the world, it is even more satisfying for him to evoke emotions in others. He loves being able to create a unique piece of art that others can draw inspiration from.

“Art, for me, is about telling stories. It is something really personal, it is something that allows you to express what is inside you. But there it doesn’t stop for me. What it leads me to is that art isn’t just about me expressing, it’s about helping others express what they feel. “

When people ask you to sculpt something, you first have an idea of ​​what they want. Down to the last detail, he asks them to describe the wooden sculpture of their dreams. Simon sometimes draws the statue to get a clearer picture. Then he gets to work creating the masterpiece, making sure all the details are incorporated. Her favorite part is handing over the creation and observing her clients’ reactions to her new living art.

Art comes in many forms and, for Simon, it is the trees that inspire his imagination. Where some people see an old tree stump, he sees a blank canvas. Using only a chainsaw and a vision in his head, he sculpts the tree into a new shape. Sometimes he is a fairy, other times he is a beacon, but whatever he decides to do, he always takes people’s breath away.

His creative work has taken him around the world, where he has competed in many wood sculpture competitions. Simon also runs his own business, creating wooden sculptures for anyone who wants one. It is always comforting to see someone thrive in life, following their heart and trusting in the process!

Meet an Oakland Man Who Befriended a Tiny Hummingbird