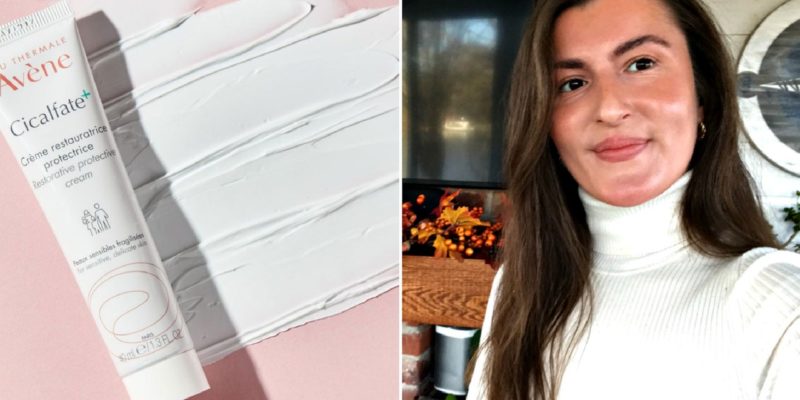 With the weather constantly fluctuating from mild to freezing and the air getting increasingly drier, my skin has been in major crisis mode. My hands, in particular, have been next-level dry, to the point where they’ve been cracked, bleeding, and peeling like I’ve never seen them peel before. (TMI, maybe, but it’s the bleak truth.) Last week, though, a miracle moisturizer known as Eau Thermale Avène’s Cicalfate+ Restorative Protective Cream came into my life, and it made a massive difference in my skin in just a few days.

To be totally honest, I’m not sure how this is the first time I’m trying the French pharmacy brand’s heavy-duty moisturizer — especially considering Allure named it one of the best products for relieving dryness and itchiness due to eczema this year. When the seasons are changing, I struggle a lot with eczema patches in between my fingers, which is such an uncomfortable spot, and so far, this formula has helped ease my symptoms significantly.

In regards to how, well, it’s likely the combination of the brand’s famous thermal spring water (known for its hydrating and soothing properties) and what’s called “C+ Restoretm,” which is a postbiotic ingredient that works to repair and preserve the skin barrier. As if that wasn’t enough, it also contains moisturizing beeswax, hydrating glycerin, and a copper-zinc sulfate complex that helps support a healthy skin environment.

After slathering on the thick white cream several times a day for the first few days, I started to notice a major improvement in my hands. The redness faded, the itchiness subsided, and the painful cracks began to close and heal. By the third day, my hands looked (and felt) almost as good as new. Since then, I’ve been using the rich formula anywhere that my skin needs some extra TLC – such as on my feet, and on my neck and undereyes where the skin is thinner.

All this to say: I really can’t recommend Eau Thermale Avène’s Cicalfate+ Restorative Protective Cream enough to anyone suffering from aggressively dry skin this season — or any time of year, for that matter. You can shop it now for $28 on dermstore.com.

Now check out more products I’ve been loving this year:

What December’s Capricorn Horoscope Predictions Mean for You