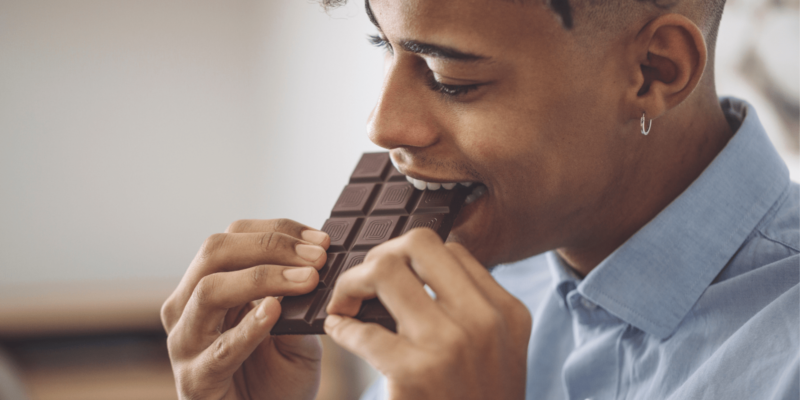 If you like to eat chocolate (who doesn’t, actually), you’ll be delighted to know that it can actually improve brain function.

A study published in the journal Scientific reports found that healthy adults had improved cognitive performance after consuming cocoa flavanols. 14 of the 18 participants saw improvements in performance on complex tests and recovery time from a mild vascular challenge.

Studies in the past have shown that eating foods high in flavonoids can improve vascular function. However, no study prior to this has shown an increase in brain vascular function and cognitive performance in healthy young adults. Researcher and professor Catarina Rendeiro in nutritional sciences at the University of Birmingham led the study. University of Illinois at Urbana-Champaign psychology professors Monica Fabiani and Gabriele Gratton also collaborated on the study.

The team recruited non-smoking adults with no known respiratory, brain, heart or vascular disease to test their theory. The researchers explained that any positive effects seen in young, healthy adults would provide the most compelling evidence.

The researchers tested all 18 participants before they consumed cocoa flavonoids and two separate trials. For the first trial, subjects received flavanol-rich cocoa, and in the second, participants received processed cocoa with low levels of flavanol. Because it was a double-blind study, neither the participants nor the researchers knew what type of cocoa people were consuming. This prevents the expectations of either party from altering the results.

About two hours after consuming the cocoa, the participants breathed the air with 5% carbon dioxide. This is around 100 times more concentrated than the air we normally breathe. Gratton says this is a standard procedure to challenge the brain’s vascular function and see how it reacts. He says that normally, the body increases blood flow to the brain to make up for less oxygen in the air.

What the researchers said about the study

“This brings in more oxygen and also allows the brain to remove more carbon dioxide,” he said.

They then used near-infrared functional spectroscopy, a technique that uses light to record changes in blood flow in the brain. By doing this, the team was able to measure oxygenation in the frontal cortex, where planning, decision-making and regulation of behavior take place.

“This allows you to measure how well the brain defends itself from excess carbon dioxide,” Fabiani said.

They found that the participants also performed better on challenging cognitive tests after ingesting the cocoa flavonoids. They accurately solved problems 11% faster than at baseline or when ingesting cocoa with fewer flavonoids. However, in the simplest tasks, the team did not observe any noticeable difference.

“This suggests that flavonoids could only be beneficial during cognitive tasks that are more challenging,” Rendeiro said.

Most of the participants showed an increase in brain function from eating chocolate, but some did not show any change.

“Although most people benefited from taking flavanol, there was a small group that did not,” Rendeiro said. Four of the 18 study subjects showed no difference in brain oxygenation or test performance after consuming the cocoa flavanols. The researchers believe that these participants had a higher level of fitness and would not show any noticeable difference in oxygenation of the brain.

“Because these four participants already had the highest oxygenation responses at the start of the study, this may indicate that those who are already fairly fit have little room for improvement,” Rendeiro said. “Overall, the findings suggest that improvements in vascular activity after exposure to flavonoids are related to improved cognitive function.”

Enjoy these other three benefits when you eat chocolate

Aside from the benefits of cocoa flavonoids on brain health, here are some others positive health effects you can enjoy when you eat chocolate:

Researchers found that dark chocolate contains more antioxidants, including polyphenols and flavanols, than any other food. This includes blueberries, which have been touted for their high antioxidant content.

3 – Improve the health of your heart.

In a Penn State University study of 470 older men, “cocoa was found to reduce the risk of cardiovascular death by 50% over a 15-year period.” Since these findings far exceeded the scientists’ expectations, they decided to investigate further. In another study, Researchers found that consuming cocoa and dark chocolate 5 times a week reduced the risk of heart disease by a whopping 57%.

We hope we have given you enough reasons to eat chocolate if you haven’t already! Aside from the amazing benefits on brain oxygenation and cognitive performance, chocolate also improves heart health. Also, eating chocolate will provide you with plenty of nutrients and antioxidants, as long as it contains a substantial cocoa content. Also, when we eat chocolate in moderate amounts a day, The same chemicals that make us feel good are released when we fall in love!

So if you need a mood booster Or you want to give your brain a little boost, add some chocolate to your diet. Now that you know all the health benefits, you can also enjoy it without feeling guilty.

20 Signs That Reveal Nutritional Deficiencies in Your Body