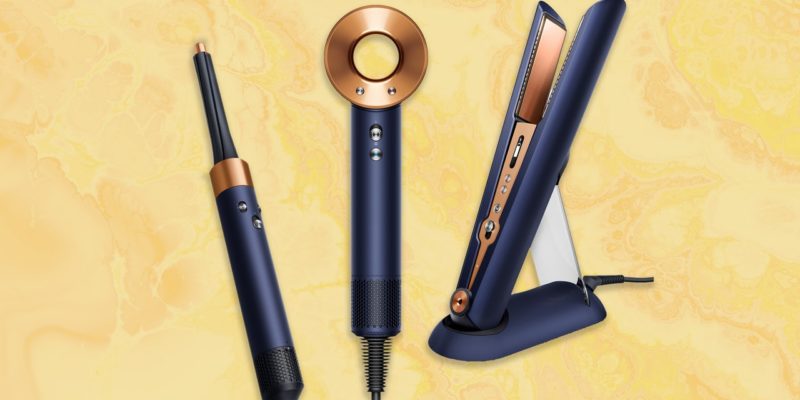 When it comes to state-of-the-art styling, Dyson’s hair tools are inarguably some of the best. The high-tech brand’s trifecta of luxury stylers may be on the pricier side, but you just can’t replicate its salon-like results with any other curling wand or blow dryer.

If you need a reason to invest in a top-tier model for yourself — or a loved one, since it’s (almost) gift-giving season — take this: Dyson’s gift sets have finally landed, and they’re even better than last year. To gear up for the upcoming season, the brand on every beauty lover’s wish list has decked out its hairstyling favorites in a new Prussian blue and rich copper edition.

The limited-edition color scheme, which draws inspiration from Dyson’s Electric Vehicle project that also incorporates the shades, can be found on each accompanying attachment, brush, travel bag, and storage case featured in the gift sets. Of course, the star of the Dyson Airwrap gift set is, well, the Dyson Airwrap styling device. This hair tool may look like your average curling iron at first glance, but it’s actually one of the most versatile stylers out there.

This tool’s main feature is its incorporation of the Coanda effect, an aerodynamic technique that gives the Airwrap its styling power, according to Dyson engineering lead Veronica Alanis. “The motor in the Airwrap spins to create an area of high pressure at the top of the styling barrel,” she says. “A high-velocity jet of air disperses out of six air slots around the barrel to create the Coanda effect, allowing the hair to curl around the barrel to style.”

The Airwrap also uses Dyson’s heat-control technology that styles at a lower temperature, protecting hair from extreme heat damage. The Prussian blue and rich copper gift set will also include all 11 styling attachments for creating a variety of curls and waves.

The Coanda effect also applies to the Flyaway Attachment of the Supersonic Hair Dryer. This add-on mimics the “brush and blow-dry” technique hairstylists use to create a sleek, smooth blowout.

“The whole point of blow-drying is for smooth hair,” hairstylist Cherin Choi of Los Angeles-based ROIL Salon previously told Allure. “Sometimes people just want to address the roots and flyaways, so if there’s a quicker solution to the styling process without overheating the hair, I can see a benefit to this.”

The Dyson Corrale hair straightener doesn’t use the Coanda effect, but it does have flexible copper-based plates. Alanis says these plates bend to grab and distribute heat on each strand evenly, preventing snagging and breakage in the process. “This greater control allows outstanding styles to be created with less reliance on heat, reducing damage by 50 percent,” she says.

Starting September 23, each of the gift sets will be available on dyson.com and at brick-and-mortar Dyson Demo Stores. Prices will range from $430 to $600.

Check out these must-have hair tools:

What went right: the flexible future of work, plus more positive news