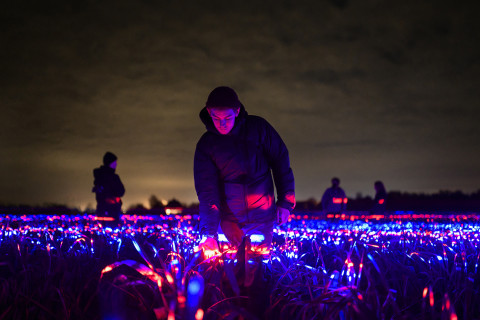 
Dutch artist and designer Daan Roosegaarde has turned a field of common leeks into a dazzling light show in celebration of the crops that feed us.

Using LED light beams, the show, called GROWING UP, is based on photobiological science that has suggested that certain combinations of light spectra can produce healthier crops.

No stranger to big inventive ideas, this latest project by Studio Roosengaarde is one of those to be called Dreamscapes, which seek to “make the farmer the hero” and celebrate the fields that grow our life-sustaining foods with a combination of art and Sciences.

The humble field of leeks is transformed at night into a stage in which millions of red and blue spirits seem to dance, while the rays of light projected by the projectors on the edge of the paddock catch every leaf and every drop of dew.

“GROW is the dream landscape that shows the beauty of light and sustainability. Not as a utopia but as a protopia, improving step by step ”, says Roosengaarde about the project. website.

The particular colors and intensity are based on new agricultural science demonstrating how different spectra of light can enhance plant growth, meaning that GROW is not a light show on its own, but also provides larger and more healthy consumers that can be grown with less pesticides.

RELATED: The new green building revolution uses wood to build ‘scrapers’ that save tons of CO2

Studio Roosegaarde has a penchant for great ideas of combining science and art. Good News Network has featured their work before, including a series of billboards in Monterrey, Mexico, which purify the air, as well as 30 trees, and a art installation in china that turns smog into diamonds.

SPREAD the good news: Send this story to those who know …