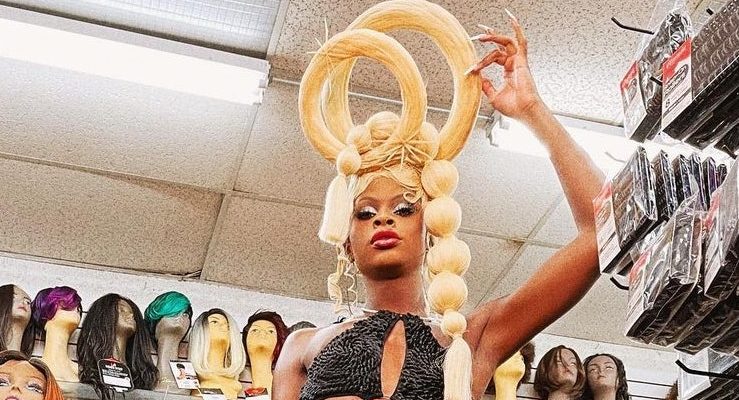 It’s not every day that you get to see someone strut through the aisles of a beauty supply store in a little black dress made of Senegalese twists. But thankfully, drag queen Reggie Gavin, known by the stage name Symone, is doing just that with her tribute to RuPaul’s “Back to My Roots” — just in time for Black History Month.

The season 13 contestant shared the tribute video with her social media fans on February 6, but the dress first made its appearance on the main stage of RuPaul’s Drag Race in the episode that aired on February 5. The category was Little Black Dress, and Symone killed it with her interpretation. The video starts with the queen sashaying towards the Los Angeles-based Harmony Beauty Supply Store, which she enters as RuPaul raps, “Black Hair is a revolution.” As she browses the aisles, we see the twists on her frock sway from side to side, a brilliant contrast to the towering, sculptural blonde wig that would be right at home on any Detroit Hair Wars runaway.

The halter dress definitely shows some skin. It’s connected at the neck and midriff with silver hardware rings, leaving most of her back exposed. When she turns around, you can see an exposed black thong (come on, whale tail!) with an even smaller silver ring smack in the middle. The Senegalese twists cover practically every inch of the dress, which stops above her knees. She twirls through the store posing in front of all the wigs, braiding hair, and Blue Magic conditioner while RuPaul calls out popular Black hairstyles like cornrows, braids, extensions, and more in the song.

For Symone’s look, Los-Angeles based hairstylist Malcolm Marquez recreated RuPaul’s hairstyle from the original “Back to My Roots” music video. The blonde wig was slicked down into finger waves with a few curly tendrils falling a bit past her shoulders. The style merely starts there. Two hollow circles of a medium and large size sit on top of her head. Affixed to the medium-sized circle in the front are thin pieces of hair formed into two stars. To finish the look, a bubble ponytail falls down the left side of her face reaching mid-chest.

Of course, her makeup is also on point. Symone paired a fiery-red lip with a silver smoky eye for a perfect beat. Her freshly-manicured, coffin-shaped nails add the finishing touch to this stunning look that pays homage to the beauty of Black hair.

Symone is killing it on the ‘gram and on the latest season of RuPaul’s Drag Race. She’s proven that she might have what it takes to win the competition this year not only with her looks, but with her overall talent and magnetism. She clearly has that star quality RuPaul commended her for, and we can’t wait to see more of it.