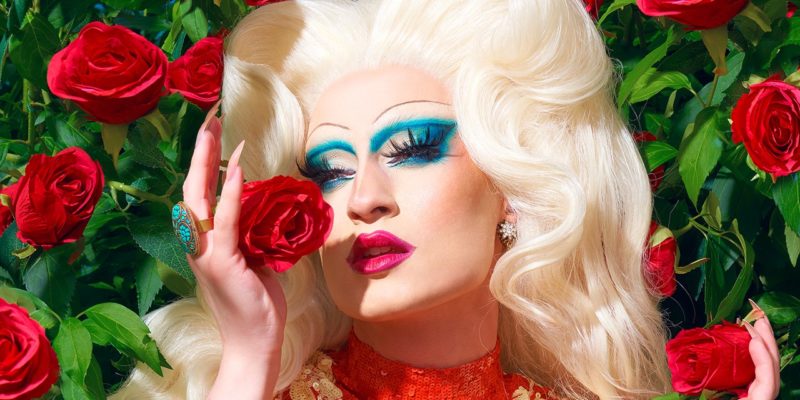 Going on RuPaul’s Drag Race, my first thought was, “I’m a makeup queen. I am not about to get read by Michelle Visage.” But when I started experimenting with skin-tone drag [makeup] and feeling pretty, it made me realize how far I’d come out of drag with my transition, and how I am more comfortable with that now. It allowed me to open up and realize I’m not just a makeup queen and that I have so much more [to offer] than that. I had grown so much as an artist without even realizing it. Makeup opened me up on the show and I’m excited to explore that more in the future. It’s definitely not my favorite [thing] in the world, but I do love a skin-tone moment every once in a while now.

On a normal day, I use two colors, but if we’re stuck on an island and I only can bring one, I’d bring a white Ben Nye Creme Stick Foundation. I love using a skin tone-ish one that has a pink undertone and highlight with the white so it gets a little dimension, which you barely even notice, but I do. Everyone asks me what my favorite black lipstick is, and I always use Hank & Henry’s. It smells amazing.

I’ve done a few solo campaigns since being on the show where I’m out of drag — a boy, shirtless, wearing eyeliner and an earring. And if you would’ve asked me in high school if that would have happened, that would have been a definite no. I’m just so proud of that. In every aspect of my life, I always say that if I’m too comfortable with some part of my art, it’s time to move on because it’s getting boring and repetitive. I need to keep pushing forward and pushing my limits to grow as a person and an artist. In the next 10 years, hopefully, I’ll be something crazier than I’ve ever expected.

This story originally appeared in the September 2021 issue of Allure. Learn how to subscribe here.

Now, see how eye makeup has evolved within the past 100 years:

The Quest to Understand Consciousness