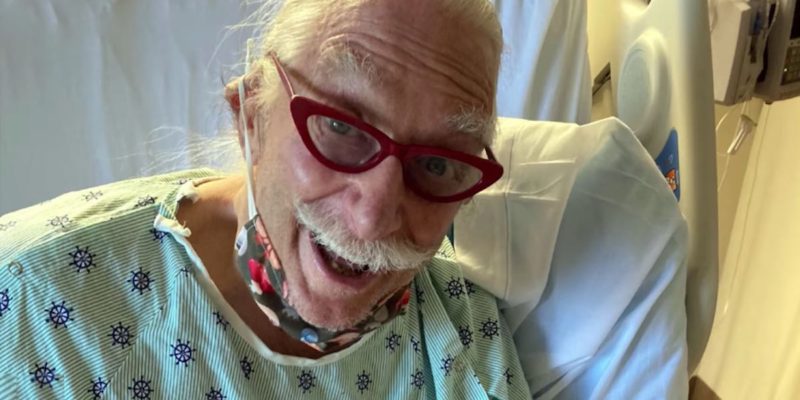 
For those unfamiliar with the iconic physician Patch Adams, for the past 50 years he has dedicated his life to providing free healthcare to thousands of patients.

Robin Williams was chosen to play him in the film patch Adams, which was perfect for a doctor who often wears a clown nose and jokes relentlessly when meeting patients, because he knows the healing power of laughter.

This week, the doctor himself was wearing a hospital gown when he made a video announcing that he had his lower leg amputated, and was delighted that he might have a new nickname, ‘Stumpy’.

The founder of a health center, Gesundheit! Institute in West Virginia, was attacked six months ago with a nasty recurring case of MRSA (methicillin-resistant Staphylococcus aureus). After three operations on his foot, he realized that “it was time to amputate.”

“With the MRSA there, I wouldn’t have a foot healthy enough to dance or clown, which are two of my favorite things.”

The 75-year-old man gleefully described the miracle of today’s prosthetics, which allow people to run and do whatever anyone else does. Plus, you now have a new accessory in your comedy toolbox.

“The beautiful thing is that it looks like a little TV screen at the end,” she said, describing her new shorter leg. “And I’ve been thinking of all kinds of opportunities to clown around.”

“I can have little hidden characters sitting on that screen … like a nice ‘full moon’ picture.”

He realized that “there is all this” negativity “around amputation,” so he has already started to joke with the hospital staff, calling his new style “Fun with amputation.”

In a way, this has been his message to healthcare providers from the beginning: lighten the mood and it will ease the fight.

CLOCK your captivating and inspiring message below….

If you wish to write to him, his address is PO BOX 307, URBANA, IL 61803 – and consult his Facebook page to follow his weekly videos on his happy recovery. If you want to donate to his hospital you can do it on his website, www.patchadams.org.

Fun Facts and Strange Customs to Celebrate the Vernal Equinox