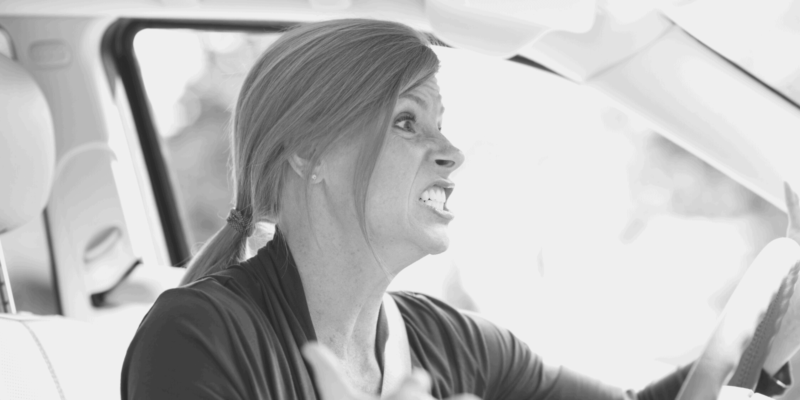 
You’re late for work and your nerves are fired. If you are late again, your boss will write it down. You have 1001 things on your mind and someone pulls up in front of you, going 45 in a 60 mph zone. The fury of the highway kicks in.

So get started. Instead of gently passing them, honk your horn, yell a few select words, and create a great show as you pass. Could you have a problem with road rage? It is a widespread problem with dangerous implications. According to Auto Insurance 101, road rage is the number one cause of accidents in the United States.

Surprisingly, here are some unsettling facts about road rage that you should consider:

It seems natural to be upset when someone cuts you off in traffic, stops in front of you, or nearly crashes you. You are just a human being, and these emotions are typical when someone has wronged you.

13 tips to fix your road rage

It is imperative to control your aggressive driving, as 100 people will die every day in this country from this common problem. Here are some things you can do psychologically to help you turn off your horn and have a moment of peace behind the wheel.

1. Get up earlier to avoid being late

Most people get so frustrated behind the wheel because they are always late. You can stop this vicious cycle by getting up just half an hour early. If you know that there is a lot of traffic where you will be traveling, you should take some extra time.

Avoid what makes you angry, which is being late. You will see a significant change in your driving behavior when you frustrate the things that are causing the problem.

If you have to commute on I-95 every day to get to work, then you already know that it will be very busy. However, is there a way to avoid using this route? What if you take a few side streets or the scenic highway instead of the fast lane?

While it may take you an additional 10-15 minutes to avoid the freeway, you can certainly avoid getting enraged. An incident on the way to work can transform your attitude throughout the day.

Have you ever heard the old saying that “Music calms the wild beast”? Well, you should use that theology to quell your inner rage when driving the highways of life. Put on music that makes you feel good. It’s hard to be angry when you’re playing your favorite songs.

Perhaps you would not be so prone to anger if you had someone with you. Having someone share the car with you may be the answer to your problem, especially if anxiety is the crux of the problem. When you chat and enjoy a good conversation, it’s easier to miss small driving violations.

If you work in a busy area, there will be times when you won’t be able to avoid the crazy traffic that will give you a headache. Many sites have some public transportation that can help you avoid the traffic nightmare. Why not sit back and relax with a good book or some music and leave the driving to someone else?

6. Meditate before you drive

Help to use meditation before getting behind the wheel. You can learn proper breathing techniques and focus your mind, body, and spirit before hitting the road. Make sure to use a relaxing meditation and not one that is supposed to put you to sleep.

One of the main reasons people are so nervous behind the wheel is that they didn’t get enough sleep the night before. If you don’t have at least 7-9 hours of sleep, then you will be in a bad mood the next day. Have you ever seen a baby who cries and screams when he is sleepy?

Well, road rage can be like a tantrum when an adult is exhausted. Nobody likes dealing with an irritable person, so get the rest you need.

Did you know that tailgating is one of the biggest causes of aggressive driving rage? When someone is mounting your bumper and you feel like you are stopping, they will crash you, it is cause for alarm.

Now, you have to make sure you don’t do the same to others. Leave at least 2-3 car lengths between you and everyone on the road to avoid tailgate-induced rage.

It is essential for notice your mental triggers. Once you find the things that drive you crazy then you must do everything you can to avoid these things. For example, if you hate trying to merge to the left when traffic is coming from the right, you should do it sooner rather than later.

Oncoming traffic can be a nightmare, so by avoiding the trigger, you can avoid an aggressive collapse.

What are the things that matter most to you in this life? Do you have a spouse, children, parents you adore? Why not put a picture on your dashboard of what keeps you going every day?

For many drivers, anger is nothing more than their exaggerated anxiety. An article in Psychology Today suggests that deep breathing is an effective way to control your anger.

If you have a pressure problem, you can use little tricks to help you control things. Rhythmic breathing is simply taking a deep breath through your nose, holding it for a few seconds, and then exhaling through your mouth.

The beauty of this controlled breathing is that it can calm your heart rate, anxiety, and anger at the same time. Plus, you can increase your concentration, which is essential on the road.

Before you put your hand on that horn, count to ten. Have you ever heard that you need to go out and count until you calm down when disciplining a child? The same principle applies to roads.

If you feel really “hot” you should stop until you can regain your composure. However, mentally counting to ten forces the brain to focus on something other than the crazy driver in front of it.

Road rage is a major problem in this country. Many classes focus on helping people channel this negative energy into something positive. A quick course filled with videos of what happens when aggressive driving is used can be revealing.

Since road rage is a problem, it is worth running a self-test to see how much risk you are at the wheel and whether your driving is at risk of causing an accident. Can you answer yes to any of these factors?

How many of these statements did you hear when you are behind the wheel? Do you see where there is room for you to make improvements?

Final thoughts on how to learn to control your road rage

Driving on the roads of life is scary enough without adding rage to the mix. A wrong decision while behind the wheel of a car can cost you your life and the lives of others. Fortunately, there are ways you can control your anger.

An anxiety disorder may be at the center of your aggressive behaviors. If anxiety makes you a frenzied mess while driving, you should talk to a doctor or therapist. It could be that your anger is sparked by lack of sleep, frequent problems with being late, and general stress that comes from traveling on busy streets.

An article published in National Library of Medicine referenced a psychological study by Plos One that found that many drivers who drive aggressively are often those with ADHD. Interestingly, impulse control problems can also influence the type of driver you become.

Whatever the reason behind your road rage, it’s time to get a grip on it. You don’t want to be or cause another statistic or incident that could have been avoided.

Protection Against Covid-19 Variants: Where to Buy KN95 and N95 Masks