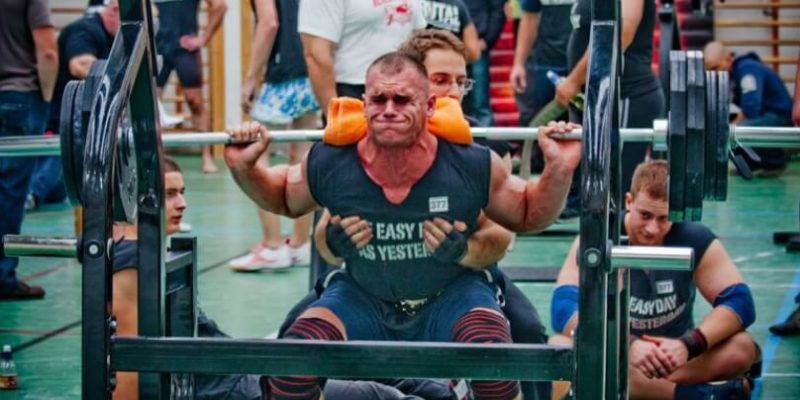 You may have heard that holding your breath while you lift weights is dangerous.

Critics of the Valsalva maneuver—the technical definition for holding your breath while lifting weights—say it increases your risk of fainting, aneurysm, stroke, and blood vessel damage, and that there’s no evidence that it helps you lift more weight.

This is why many personal trainers tell their clients to breathe continuously through each rep, why doctors often tell their patients not to use the Valsalva maneuver, and why the American Heart Association warns against it, too.

Others say the Valsalva maneuver is not only safe, but an essential technique for safely lifting heavy weight.

The short answer is that while the Valsalva maneuver does increase the risk of stroke, blood vessel damage, and fainting, this is only true for a handful of people with a high risk of cardiovascular problems. For otherwise healthy people, the Valsalva maneuver will help you lift more weight and will probably lower your risk of weightlifting injury, too.

The Valsalva maneuver is the process of forcefully breathing out against a closed windpipe.

Specifically, you try to breathe out while keeping your glottis (the space between your vocal cords) closed.

This technique traps air in your lungs and creates pressure inside your abdomen, known as “intra-abdominal pressure.”

When used in medicine, the Valsalva maneuver is used to help diagnose problems with the autonomic nervous system (ANS) and to bring down your heart rate if it gets too high.

When used by weightlifters, the Valsalva maneuver helps stabilize the torso against heavy loads and prevent the spine from bending during exercises like the squat, deadlift, and bench press.

The name “Valsalva” comes from a seventeenth-century physician Antonio Maria Valsalva, who studied the anatomy, function, and diseases of the ear. In the original version of what became known as the Valsalva maneuver, he instructed patients to exhale while holding their mouth and nose closed to clear fluid from the inner ear and test its function.

The Valsalva maneuver that’s used in weightlifting is different in that you don’t need to hold the nose closed, and instead exhale while keeping your windpipe sealed.

The reason people use the Valsalva maneuver is because it allows them to lift more weight.

As the lungs expand, they put pressure on the back, internal organs, and chest, and this helps your torso resist being bent or pushed out of position when you’re throwing around heavy weights.

The most common analogy people use to describe what’s going on is that of a soda can.

Your upper body works more or less the same way. When you trap air in your lungs with the Valsalva maneuver, your torso becomes much more rigid and unbending. This allows you to lift more weight with good form, which is why almost everyone who lifts heavy weights intentionally or unintentionally uses this technique.

Many trainers, fitness “gurus,” and medical professionals argue that the Valsalva maneuver is dangerous because of its ability to rapidly spike blood pressure.

It’s true that the Valsalva maneuver can raise blood pressure three to four times above resting levels, but there’s little evidence this is bad for you. Any kind of exercise temporarily increases blood pressure. If it didn’t, your muscles wouldn’t have enough oxygen to keep contracting, and you’d never be able to do anything more strenuous than roll out of bed.

Weightlifting is unique, though, because it causes a much larger rise in blood pressure than other kinds of exercise, especially when using the Valsalva maneuver.

Is this dangerous, though?

Almost everyone reflexively does the Valsalva maneuver when lifting weights, so if it’s dangerous for everyone, you’d expect many weightlifters to suffer problems like blood vessel damage, stroke, and fainting.

And this simply isn’t the case.

Research shows that weightlifting strengthens the heart and blood vessels. It also reduces your average blood pressure and risk of heart disease over time.

Experienced weightlifters also have a smaller rise in blood pressure than people who are new to weightlifting, which indicates that the heart and blood vessels adapt to handle these swings in blood pressure over time. This makes sense considering that the heart and blood vessels are muscles much like any other, and they both grow stronger and more resilient in response to strength training.

In one of the largest reviews on this topic, researchers at the University of Sydney found only 19 cases of people who may have injured themselves using the Valsalva maneuver before 2011.

I say “may” because we don’t even know if these people were using the Valsalva maneuver. The injuries were thought to be related to a large increase in intra-abdominal pressure, but that happens with any kind of weightlifting regardless of how you breathe.

If we assume that these 19 injuries were thanks to the Valsalva maneuver, though, the risk is still small. For comparison, there were 25,335 weightlifting injuries recorded between 1990 and 2007, and 11 people died just from dropping weights on themselves between 1999 and 2002.

Among these 19 cases, ruptured blood vessels in the eye, brain aneurysms, and air leaking into the chest cavity were the most common injuries.

While this may seem concerning at first blush, keep in mind that all of these issues are strongly affected by genetics. In other words, it’s likely that most of the people who injured themselves using the Valsalva maneuver had a preexisting condition that increased their chances of blood vessel damage. Of course, these accidents could also have happened during any kind of strenuous exercise.

It’s possible that holding your breath, as you do during the Valsalva maneuver, could make you faint while lifting. And if you spend any time on YouTube, you may have seen this in action.

The thing is, most serious lifters don’t hold their breath for more than a rep or two, which isn’t usually enough time to cause lightheadedness or fainting. When the Valsalva maneuver is done properly, you’re only holding your breath for a few seconds before releasing the pressure, and this significantly reduces your chances of blacking out.

That doesn’t mean it couldn’t happen, but it’s not as likely as many people seem to think. Remember, too, that as you become more experienced your body adapts to better handle these swings in blood pressure, which also probably reduces your chances of fainting.

Is the Valsalva Maneuver Safe?

For most people, yes.

Research from The University of Queensland, Yale University School of Medicine, and the National Institute of Occupational Health shows that increased intra-abdominal pressure increases spinal stiffness and lumbar spine stability, and decreases spinal flexion when moving or resisting heavy loads.

In other words, when you increase your intra-abdominal pressure, you’re less likely to injure yourself while lifting and you’re better able to support heavy loads.

The only people who may want to avoid the Valsalva maneuver are those with a preexisting medical condition such as heart disease, or those who’ve suffered a medical injury related to high blood pressure, such as stroke.

How to Do The Valsalva Maneuver When Lifting

The Valsalva maneuver has five steps:

FAQ #1: Who should use the Valsalva maneuver while lifting?

If you want to gain muscle and strength quickly and safely, you should use the Valsalva maneuver.

Instead of fighting this phenomenon (by breathing in and out slowly throughout each rep, as many trainers advise), you’re better off using it to lift more weight.

FAQ #2: Who shouldn’t use the Valsalva maneuver while lifting?

People with a history of heart problems and/or high blood pressure should talk with their doctor before lifting heavy weights or trying the Valsalva maneuver.

As the Valsalva maneuver causes an increase in blood pressure, it’s not generally recommended for people with dangerously high blood pressure or those with heart disease or who’ve suffered heart damage in the past.

That said, everyone’s health history, circumstances, and risk differs, so you should talk to your doctor before you rule out the Valsalva maneuver altogether.

FAQ #3: What should you do if the Valsalva maneuver makes you lightheaded?

It’s normal to feel slightly lightheaded after a hard set, especially during compound exercises like the squat, bench press, and deadlift.

That said, you shouldn’t feel lightheaded during your sets. If this occurs, it’s usually because you held your breath for too long.

If you still feel lightheaded despite taking a breath between each rep, it’s possible you may not be resting enough between sets or are trying to trap too much air in your lungs at one time. To fix this, rest at least two to three minutes between sets and inhale slightly less before performing the Valsalva maneuver.