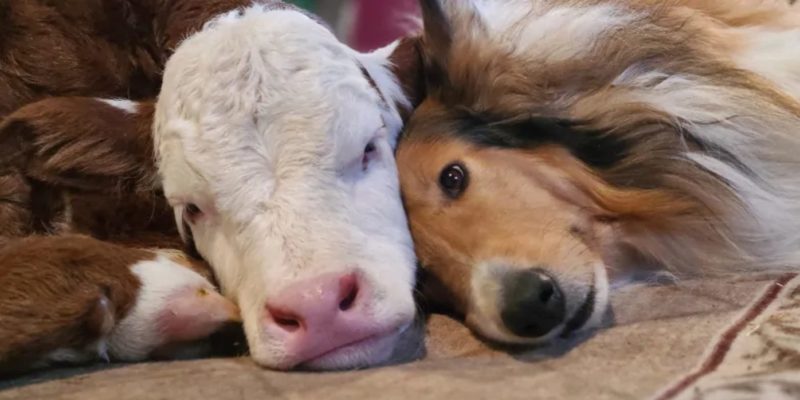 
No matter how you measure it, minus 50 ° C or minus 58 ° Fahrenheit, it is cold enough for someone to freeze just thinking about it.

While it wasn’t a night suitable for man or beast, that’s what the thermometer read on a Saskatchewan farm when a calf that couldn’t wait until the weather warmed up recently decided to make its natal debut.

Bonnie Potoroka had gone to see her pregnant heifer (ironically named Summer), only to find that the cow’s newborn progeny had arrived earlier than expected and were already in danger from the elements.

“It just wasn’t hot enough,” Potoroka said. CBC News. “A baby is wet when it is born, and it was already cold and its ears were starting to freeze, so I took it to the heated store and that’s where it stayed.”

Along with the heater, the yet-to-be-named pup has received an extremely warm welcome from the Potoroka Collie, Mickey. In fact, when the baby is not in the stable with its mother, the couple is quite inseparable.

PLUS: Hikers brave miles of icy mountain trails after rescuing a stranded dog for 2 weeks

Baby cows, like baby humans, spend a lot of time sleeping. “She will lie down on the rug and he will come to her side and lie down next to her. They usually just sleep together, ”Potoroka told CBC.

Whether the bond will continue as the calf ages is anyone’s guess, but since it’s the first time Mickey has made such friendly proposals to his farmmates, Potoroka believes the relationship could end up lasting.

RELATED: Loyal dog follows ambulance and waits almost a week to meet his human at the hospital

For now, the adorable couple seems to have lost moooin sharing each other’s company.

SHARE this sweet story with your friends on social media …