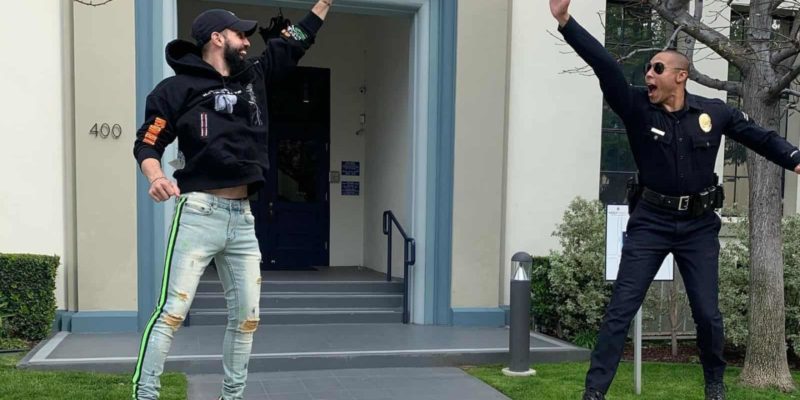 
In recent years, people have distrusted the police, but one policeman found a unique way to connect with the youth in his area. Arius George, a sergeant with the Los Angeles Police Department, calls himself the “stunt cop” because of his impressive basketball skills. Use this as a way to break the ice with the youth in your area. Arius hopes to win the trust of his community and remind people that cops are human too.

He discovered his talent for the first time when one day he was playing basketball with his brother. Before leaving the court, Arius threw a basketball at the wall without thinking about anything, and almost hit the hoop. As soon as he saw that, he told his brother that he thought he could make the shot. So he practiced a couple more times and ended up doing it on the third try!

“It got more and more fun and developed from there. I mean the most rewarding thing is interacting with people. “

He says that many people he connects with seem surprised once they notice his police uniform. They never thought of a police officer doing cool things like basketball tricks. So young people on the court can see a different side of the police because of Arius’ example. They come together over their shared interest in basketball, and this helps Arius bridge the growing gap between the police and the average citizen.

One of his most popular tricks is to do the standing shot backwards, sometimes from the middle of the court! He also does his original trick of bouncing the basketball off the wall and into the hoop. Other trick shots include dunks, spinning the ball with one finger, and taking a shot while sitting. He likes to add new tricks to his routine as often as possible.

Basketball tricks take him all over town

“Being creative is probably the hardest part of doing trick shots,” he says. “Sometimes I get inspired by math, or sometimes I just go to a gym or park and just stand there and look around, and see what comes to mind.”

He has even practiced his back half court trick on the LA Lakers court! When he’s not in gyms or big stadiums, he likes to explore the city and go to new parks. On his YouTube channel, you can see him venturing into new neighborhoods and connecting with many people through his art.

“I hope to continue what I am doing and allow it to grow more and more and reach more people,” he says.

Arius hopes his stunts continue to show the community that cops really do care and want to protect people. He never imagined that his love of basketball would allow him to connect with so many people throughout his city. He not only knows his community on the court; it also controls them in their homes.

On his Instagram, he posted videos of himself and the team buying pizza and a basketball goal for a grandmother and her five grandchildren that she is raising. In another video, they appeared at the home of a 93-year-old woman to mow her lawn during the stay-at-home order. In another video, he crashed into a kids’ summer camp to do a trick on them, and it made their day!

Arius hopes his positive influence in the community will help heal the growing divide between police and people. Especially in the last year, tensions between the police and citizens have been at an all-time high. Unfortunately, the media often paints a one-sided picture of police officers when reporting on police brutality and racial profiling. While these issues need to be addressed, the reality is that most cops are there for the people.

Why we need good policemen in our society

There will always be some bad apples in any area of ​​society, most people really want to help and have good hearts. This is also true for the police, but they are held to a higher standard due to the power they possess. The protests this year were completely justified, as police brutality towards any race must be eradicated. We cannot have a peaceful world as long as certain people continue to abuse their power.

However, without the police, we would have no one to monitor the community and respond to emergency calls. Society would turn into chaos because no one would be there to enforce the laws. If someone broke into your home and stole something, for example, you would have no one to turn to. Not only do cops answer 911 calls, they help the community in smaller ways as well.

If your car breaks down on the side of the road, a passing cop will help you if they have time. They have helped people change flat tires, jump their car and even make repairs depending on the police. They give food and clothing for the homeless, help people search for lost pets in their neighborhood and buy gifts for families in need for Christmas.

Most police just want a happy, crime-free society, and they go out of their way to help. Some go the extra mile to make sure their community is safe and well cared for.

Final thoughts: Cops connect with their communities in many ways, sometimes even basketball!

Not all police officers are the same. Some work their normal shifts and go home after work, but others like Arius are on a mission. He wants to show people that cops really care about their communities and are about the people. He appears in parks and gyms in Los Angeles to bond with people through basketball.

His tricks have helped him make new friends and connections across the city, and he hopes he continues to grow. As you bond with people in your shared love of basketball, you are also helping to heal hearts. He wants people to know that they can trust the police, and we should see them as friends rather than enemies.

These Women Have Been Penpals for 70 Years, Forging a True Friendship From 10,000 Miles Away

Saudi Arabia is Building a Zero-Carbon City With No Cars or Pollution: ‘A new era of civilization’