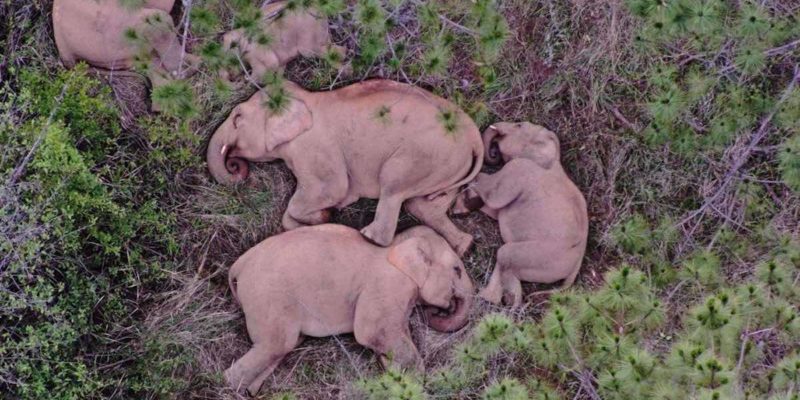 With five salty ponds and many different types of plants that can meet your dietary needs, the Jinghong Nature Reserve’s elephant food court spans 670,000 square meters – the same size as the Porche car assembly plant in Stuttgart. , or about 62 European soccer fields.

Elephants travel great distances each year, whether they live in China, India, or Africa. They do not have the concept of land ownership or borders, and can often bring economic ruin to any unfortunate farmer whose fields are nearby when an elephant determines that it is time for lunch.

Since the end of the last century, the Asian elephants of Jinghong have enjoyed protected status and has grown in number from 85 to 185. This has led to greater conflict with the locals during migrations.

The food court started last December and was completed in May, and its position in a national forest reserve was cleverly selected to ensure that it was passed through every year during migration. The “food base” or “dining room,” as described by Cha Wei, deputy director of the Jinghong Reserve, is meant to eliminate the need for pachyderms to raid nearby farms.

“If they are provided with enough food, the elephants will not go to the villages or farmland to search for food, which can help resolve conflicts between the local population and wild elephants,” Cha said according to the news agency. Xinhua.

RELATED: 35 circus elephants come to the incredible sanctuary of Florida to retreat among forests, grasslands and 11 watering holes

Now they have returned to their traditional habitat of Yunnan’s Mojiang County, where everyone, including a road-born calf, is stable and accounted for.

Why Your Eyelashes Are Falling Out More Than Usual — Expert Advice