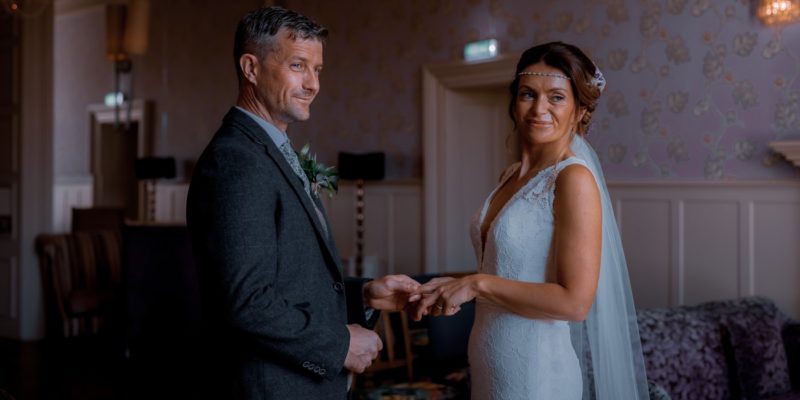 
Childhood sweethearts have been married in a real life version of The notebook After 22 years of separation, he even proposed to her with the engagement ring he gave her when they were 15 years old.

Helen Marshall and Graeme Richardson are in their early forties. They met at school and admired each other from across the hallways before falling head over heels in love as teenagers.

After nine months of romantic walks, school discos, and sneaking out for a kiss in the back of the bike sheds, young Graeme got down on one knee and proposed.

But her parents worried that they were too young and that the engagement never happened. Graham left for college in 1994 and the couple separated.

As in the movie with Ryan Gosling and Rachel McAdams, their letters proclaiming their lost love never reached each other, and they went on with their separate lives.

The two went on to have long-term relationships and children, and even met from afar, glimpsing each other, when their children attended the same school.

When the two separated from their respective partners, Helen approached her first boyfriend through Facebook and they fell in love again 20 years later.

She found out that he had longed for her for years after their forced separation, and knelt down again, proposing to her with the same ring he wore more than two decades earlier, only this time they were on vacation together in Croatia.

The loving couple eloped and got married last month. “We feel so happy now,” Helen said from the farm where they now live together. “We are the other half of each other. I feel at home. As if it were complete. He is my soul mate and I am his. “

MORE: Muddy bride sacrifices dress to give birth to calf during wedding reception

Graeme said, “Helen is the other half of me. She is the opposite of me; the extrovert to my introvert. It just feels like the right ending. My friends have never known me as the happy and content man that I am now. “

A love story that was simply meant to be

In high school, Graeme was popular with the girls, and all the boys liked Helen, but neither of them had the courage to ask for a date.

One lucky day, a friend of Helen’s promised her a chocolate bar if she dared ask Graeme out.

Romance blossomed from day one and turned into true love as they walked through the Lake District and sat by the picturesque waters.

They knew they wanted to get married and Graeme worked hard on weekends for £ 3 an hour to buy her a diamond engagement ring.

RELATED: Saved a stranger from drowning in India, now they are married in the Netherlands

It is beautiful that the ring has finally been put to use as it was intended so many years ago. Cheers to Helen and Graeme.