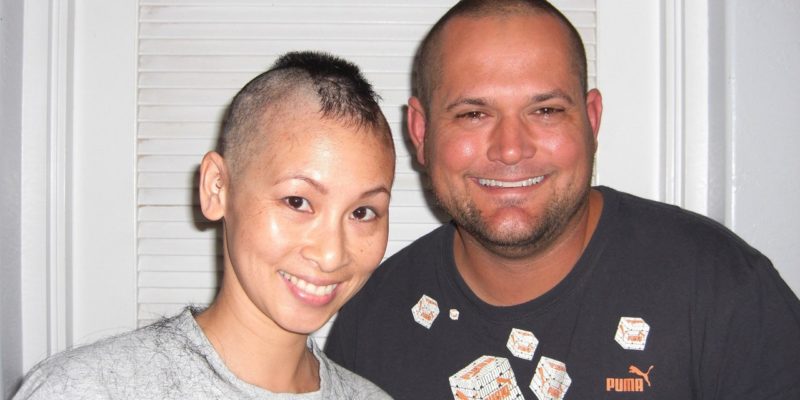 During my treatment, I chose to take time off from work. When I returned to work, I tried the scarf thing. I matched scarves to my outfits, wore different lengths, and tried different tying techniques, but then I realized something: It was a lot of work. It was uncomfortable. And it was hot. I wasn’t fooling anyone by hiding behind a scarf.

I decided to ditch the scarves and embrace the baldness. While I was growing out my hair, I met a woman who had alopecia. “Chemo,” I said, pointing to my head. “At least it will grow back,” she replied. That was a turning point for me.

How I handled the awkward phase: Have you ever tried to tame Asian hair? Talk about a growing-out phase! I needed a product that would weigh down my hair, which tended to just stick out. I used a great Aveda styling product that unfortunately they don’t make anymore. I liked it because it was thick and worked its magic, and made my bedhead look intentional.

While I was growing out my hair, I met a woman with alopecia. “Chemo,” I said, pointing to my head. “At least it will grow back,” she replied.

Favorite hair milestone: I wanted my first haircut so badly. I was so excited to have hair that was long enough to cut! When I sat in the chair, I could tell I didn’t have enough hair for a trim, but the stylist was nice enough to clean up the edges. I don’t even think she charged me.

Why I Kept My Hair Short After Cancer | Hair Loss Story