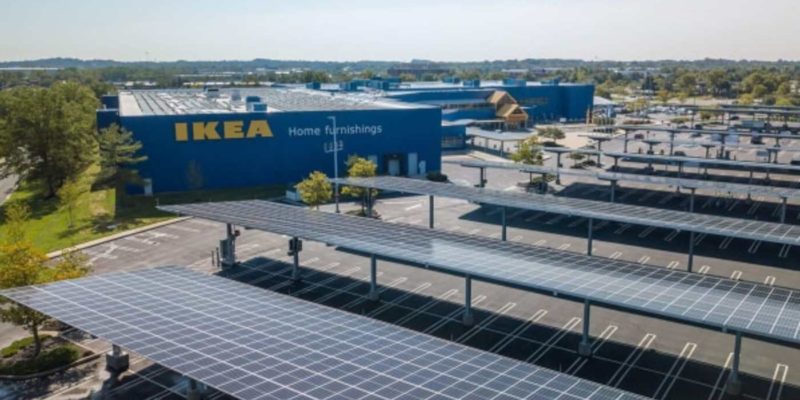 As the world’s largest furniture retailer has a new commitment to reduce emissions by 50% by 2030 and achieve carbon neutrality by 2050, IKEA has decided to fill that gap with clean energy, allowing customers to buy electricity and wind and solar infrastructure. from IKEA.

Some of these emissions calculations represent a remarkable display of responsibility, as the group looks at sales of electrical appliances and takes into account the electricity used to power them before adding that figure to its climate targets.

“At IKEA, we want to be fully circular and climate positive by 2030, based on renewable energy and resources. We believe that the future of energy is renewable and we want electricity from sustainable sources to be more accessible and affordable for everyone, ”said Jan Gardberg, Manager of New Retail Business at Ingka Group.

Since 2016, the Ingka Group, which manages 367 of the 423 stores worldwide, has invested 2,500 million euros ($ 2.76 billion) in renewable energy, including two solar parks in the US, one wind farm in Romania, and 534 wind turbines in 14 countries. They have also installed nearly a million solar panels in their stores and market IKEA-brand solar panels in 11 world markets.

PLUS: IKEA is abandoning all its single-use plastics in all stores

In addition to fueling their furniture-powered empire, customers can now purchase this renewable energy.

Through the STRÖMMA offer, customers living in Sweden you can buy certified and affordable electricity solar and wind power, and use an app to track your own electricity usage. Customers who have already purchased solar panels from IKEA can also track their own production in the app and resell unused electricity.

So far, their home country is the only one where IKEA customers can buy electricity, but considering the brand now owns 100 more wind turbines than stores, it won’t be long before they enter utility markets elsewhere. places.

IKEA has just teamed up with H&M, Walmart and Kingfisher Group to start the Initiative “Race to Zero”, with the aim of taking the initiative in the retail industry to reduce global warming to levels lower than those described by the IPCC.

Like IKEA’s personal goals, the Race to Zero commitment involves cutting emissions in half by 2030 and becoming neutral by 2050 – a huge challenge for any retail business where the industry thrives on cheap and large production and sales. scale.

“At IKEA, we are committed to becoming climate positive by 2030 and as part of that, we are also committed to the 1.5 ° C target in the Paris Agreement. This movement seeks to engage the retail sector and, by working together and acting fast, focusing on what has a real impact, we can really make a difference. For people and the planet, ”said Jesper Brodin, CEO of Ingka Group I IKEA.

RELATED: IKEA provides parking for a local mosque so that 800 Muslims can celebrate the end of Ramadan together

“Joining the Race to Zero Advances: The Retail Campaign is an opportunity for retailers to help the retail industry accelerate the entire economy’s transition to a healthy, resilient and carbon-free future,” its website explains. “Retailers will receive industry-specific guidance, network access and a ready-made strategic workforce to achieve net zero emissions.”

IKEA has been fighting emissions wherever they can be found, including through the purchase of forests as CO2 absorbers, and the buying old furniture to avoid ending up in landfills.