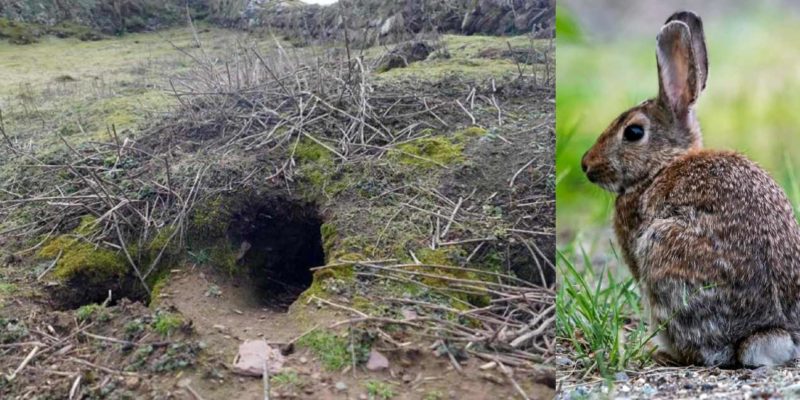 Alone on the windswept island of Skokholm, guardians have found Stone Age tools and a pottery shard from an unlikely study plot – in a rabbit hole.

The finds date from 3,750-9,000 years ago and include tools for making sealskin clothing and boats and a fragment of a burial urn, suggesting that the small island may have been used for a ritual burial.

Richard Brown and Giselle Eagle, the only humans on the island since the arrival of COVID-19, discovered the first of two “beveled pebbles” outside a burrow where, rather than grave robbers or artifact hunters, it had been unearthed from the floor. by the island rabbits as they strove to make their underground home.

Taking a photograph, they sent it to Dr. Toby Driver of the Royal Commission on Ancient and Historical Monuments of Wales, who replied that “the photos are clearly of a late Mesolithic beveled pebble.”

“These are common and distinctive finds among scattered flint of this age found at coastal sites from [northern] France to the west of Scotland, and also on some coasts of the north of England ”, he added, according to the Skokholm Blog, managed by Brown and Eagle.

“We had our eyes on, and it wasn’t long before we found another very likely candidate for a beveled pebble along Little Bay Wall (again exposed from rabbit digging),” wrote the couple two days later, when they came across another find.

“Although we couldn’t find any more stones at the original site downwind of the hill, we did find a piece of pottery that to our (very) inexperienced eyes looked old.”

Once again they alerted an expert and received an analysis that the thick-walled pottery fragment was part, not of an old food storage, but of a burial urn. Jody Deacon from the National Museum of Wales told them that they are “common in Ireland and seem to appear more frequently in western areas of Wales.”

“[This is the] First Bronze Age burial urn fragment from the Western Pembrokeshire Isles, ”commented Dr Driver upon hearing the news. “The prehistory of Skokholm has completely changed in just a few days.”

CHECK OUT: Ancient biblical scrolls and rare coins of ‘priceless value to mankind’ discovered in a desert cave

From nature reserve to national reserve

Located two miles off the Pembrokeshire coast in Wales, the island of Skokholm, which means “wooded island” in the language of the Norse peoples who established it in Viking times, is only a mile long and a half mile wide. at the widest point.

PLUS: Paleontologists Discover Rarer Than Rare Oviraptor Fossil In Nest Of Eggs With 24 Embryos Inside

Nicknamed, “Dream Island,” rabbits and seabirds, along with other marine species, are the only inhabitants outside of primitive campers seeking a nighttime wilderness experience. The island was bought and turned into a nature reserve by the The Wildlife Trust of South and West Wales.

Colonized each summer by tens of thousands of shearwaters, petrels, gulls, guillemots, puffins and razor clams, there is also an abundant population of rabbits. Rabbits, according to Danièle Cybulskie writing in Medievalists, were brought to Britain by the Normans, and burrows were created for them on islands such as Bannow, and probably Skokholm, to protect them from predators and provide them with a stable food and fur resource.

The nearby island of Skomer is best known for its well-preserved prehistoric archeology, and Royal Commission archaeologists Driver and Louise Barker, who have carried out archaeological studies there, intend to pay a small visit to Skokholm after the Quarantine restrictions are relaxed to further investigate the site. .

“Now Skokholm is producing some amazing prehistoric finds,” the Commission writes in a statement. “It looks like we may have an Old Bronze burial mound built over a hunter-gatherer site from the Middle Stone Age, disturbed by rabbits. It is a protected place, where the island hut now stands, and it has clearly been settled for millennia. “

HOP this amazing find for your friends …