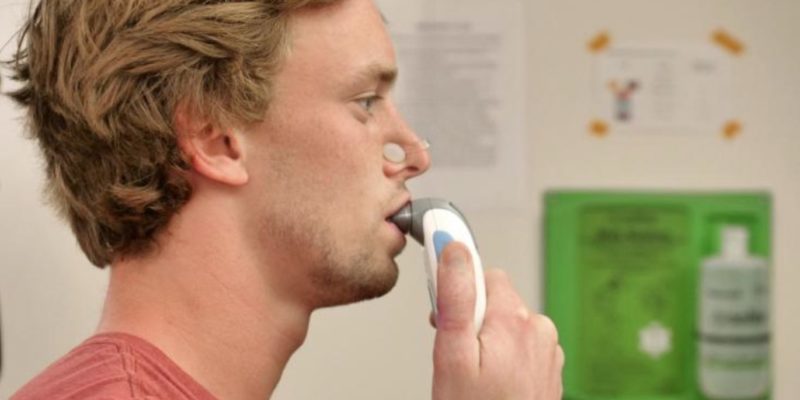 
A five-minute breathing exercise you can do while watching TV can lower your blood pressure as much as medicine, according to a new small study.

Described as “strength training for the respiratory muscles,” it uses a handheld medical device that provides resistance when a person inhales through a tube. Scientists say it can reduce the risk of cardiovascular disease in older adults and could also help athletes run faster marathons.

The technique may be even more effective in lowering blood pressure than going for a run, especially in postmenopausal women.

Professor Doug Seals of the University of Colorado at Boulder praised it as an easy, drug-free option.

Developed in the 1980s for respiratory diseases to help patients strengthen the diaphragm and other respiratory muscles, the regimen was prescribed for 30 minutes a day with low resistance.

But inspired by HIIT, researchers now believe that 30 high-resistance puffs a day, six days a week, could yield many benefits.

The study, published in The Journal of the American Heart Association recruited 36 healthy adults ages 50 to 79 with blood pressure above normal, half doing high-resistance IMSTs for six weeks and the rest on a placebo where resistance was much lower.

Even six weeks after they stopped doing IMST, they maintained most of that improvement.

The treatment group also saw a 45% improvement in vascular endothelial function, or the ability of the arteries to expand upon stimulation, and a significant increase in levels of nitric oxide, a key molecule in dilating arteries and preventing artery disease. plaque buildup. Nitric oxide levels naturally decline with age.

The IMST group saw their systolic blood pressure drop nine points on average, a reduction that generally exceeds that achieved by walking 30 minutes a day five days a week.

That decrease is also equal to the effects of some medications that lower blood pressure.

“We found that it is not only more time efficient than traditional exercise programs, but the benefits can also last longer,” said lead author Dr. Daniel Craighead of UC Boulder. “If aerobic exercise doesn’t improve this key measure of cardiovascular health for postmenopausal women, they need another lifestyle intervention that does. This could be “.

POPULAR: Coffee is now linked to reducing the risk of many ailments, including liver disease, Parkinson’s, melanoma, and even suicide

Craighead, who uses IMST for his own aerobic training, added: “It’s easy to do, it doesn’t take long, and we think it has a lot of potential to help a lot of people.”

In fact, having a form of therapy available that lowers blood pressure without medication, or doing aerobic exercise, which so many people tend to abhor, would be a great option.

Meanwhile, the the research group is developing a smartphone application that allows people to do the protocol at home using already commercially available devices.

NO pressure: Share this with your circle on social media …

Meet the Queen of the Cyr Wheel (MUST SEE!)