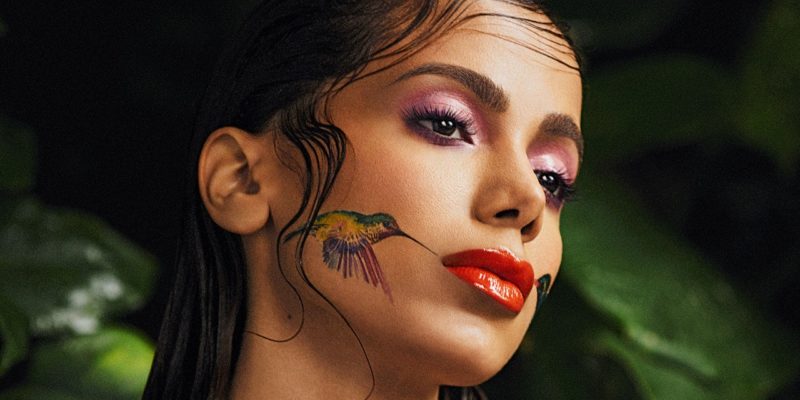 Times have changed since the tall, tanned, green-eyed girl from Ipanema turned heads and inspired lyrics as she strolled to the sea. These days, pop superstar Anitta is an uncensored force changing the face and flavor of Brazilian beauty.

In the history of Brazilian exports, there may be no truer representation of the nation’s flavor than Anitta. She is not a supermodel, not a movie star, not a muse walking the sands of Ipanema. She is a girl from the favelas, who learned to sing in church, took courses in business administration, and rose to global fame on a wave of grit, determination, and some serious bass-thumping, ass-bumping music.

Before Anitta appears for an interview I already know she is likely to be wearing a strapless ruched top and beachy, sun-kissed hair and that her backdrop will be, as the kids say, drippy. Because, like the other 52.1 million Instagram followers who watch her every move, I just saw the IG Story of Anitta, along with her dad and a friend, checking into a breathtaking private villa in the Dominican Republic where she will spend a two-week quarantine before traveling to the United States to begin promoting her next single, “Girl From Rio,” which is scheduled to be released April 30.

So who exactly is the girl from Rio? Anitta, born Larissa de Macedo Machado, grew up in the working-class Honório Gurgel neighborhood. She says that she always knew she wanted to be a performer and in 2010 posted a video on YouTube, where, in a striped minidress, she sang into a deodorant stick. The act landed her an audition with a local record label. She took her music (with influences of pop, funk carioca, and reggaeton) outside of the favela, outside of Rio, then outside of Brazil. Currently, she has more than 3.5 billion views on YouTube; she’s collaborated with Cardi B, Madonna, and Snoop Dog (plus every major Latin singer, including Maluma and J Balvin); and has starred in two Netflix docuseries that chronicle her rise to fame, Vai Anitta and Anitta: Made in Honório. She’s performed at the Olympics, led Carnaval parades, and played big festivals around the world. But perhaps her most significant artistic accomplishment has been the ability to do all of these things without adhering to some carefully cultivated, music-studio-made image of a Brazilian pop star. You see, until recently the 28-year-old was her own manager, overseeing every aspect of the Anitta brand. And if there was one job requirement for that position, it was brutal honesty.

“I accept myself, but I enjoy changing. For me [plastic surgery] is like changing my hair.”

“I hate liars,” she says. “The worst thing to me is lying.” From her bisexuality to her heartbreaks to her plastic surgeries, Anitta hides nothing. “I think about young people looking at a magazine or Instagram and saying, ‘I wish I was born like that. She’s beautiful. Her life is perfect,’ and feeling bad about themselves. For me, there are two options: Either my fans are going to know the truth, like that I am full of plastic surgery, or they are going to know that I am a liar.” For the record, the plastic surgeries began when she was 20 and include multiple breast reductions, rhinoplasty, and jawline reshaping. “It’s not that I don’t accept myself,” she says. “I do accept myself, but I enjoy changing. For me, [having plastic surgery] is like changing my hair.”

But with Anitta, what you see — doe eyes, full lips, glowing, tawny skin — doesn’t even begin to tell the story of what you get. “When I’m onstage shaking my ass or showing my body, I’m not thinking about [being sexual]. I’m thinking about freedom. Because all I want is for people to be free to be whoever they want to be without judgment. And the way my brain works is like, if I push the limits, if sometimes I go one step too far, that’s how I break down the wall,” she says, quickly adding, “but that’s Anitta, not Larissa. Larissa is not much of an ass-shaking person.”

Twenty minutes into her Netflix series Anitta: Made in Honório, Anitta explains how she arrived at this place of unapologetic self-expression. The story goes like this: An eager-to-please and vulnerable 14-year-old girl, an angry, overbearing man, and a sexual assault. “It only was just recently that I stopped blaming myself for what hap- pened,” she says, her tear-streaked face looking straight into the camera. “Anitta was born out of my desire and need to be a brave woman. One who no one could ever harm; who no one could ever bring to tears; whose feelings no one could ever hurt; who could find her way out of any situation. That’s how I created that character.”

From the resort villa in the Dominican Republic, over a breakfast of scrambled eggs on a bagel with cream cheese, Anitta tells me that she came forward with the revelation because she got wind that a reporter was going to publish a story about the incident: “I was afraid of my biggest secret getting leaked by a person that I don’t even know, that I don’t even trust.” But more than that, “I realized that when I watched other women talking about [their own sexual-assault experiences], I felt hugged. And that for teenagers, for the women, for anyone that follows my work, to see what I went through, sharing my own story was going to be a fucking big hug.”

Brazil has one of the highest rates of violence against women in the world. I watch Anitta’s music videos with this horrifying statistic in mind and realize that — amid all the skimpy costumes and provocative choreography — every one of them aims to deliver a deeper message.

“Many young people today don’t like to have con-versations about things like prejudices against women, about social differences, about the rich and the poor,” says Anitta. “They say, ‘Oh, that’s boring, that’s annoying.’ They think it’s a waste of time. So I try to show things in my videos that people are going to discuss. At the end of the day, that’s how I like to send a message. I trick them.”

“Vai Malandra,” for example, takes us inside Rio de Janeiro’s Vidigal favela, where you don’t have to be a size 2 to wear a string bikini. “Atención” shows women of all shapes, skin tones, and ages twerking and giving themselves breast exams. “Me Gusta,” featuring Cardi B, was filmed in Bahia’s capital city, Salvador, and highlights the beauty of Afro Latinas and people from LGBTQ communities who live in the area. It’s a far cry from the leggy, beachy, often-blonde brand of Brazilian beauty that came to fame in the ’90s and went on to dominate fashion run-ways and magazine covers.

“So what does Brazilian beauty mean to you, Anitta?”

“When you go to Brazil you see lots of types of women. We all look different,” she says. “But then you see the energy. You feel the energy. And that is what Brazilian beauty is about. Energy. Okay, and our big butts.”

“I like my color to look very natural, so I only go to Rey, nobody else. It could be, like, five months before I can get to my next appointment and I’d still wait to go to Rey.”

“What Flavio does with extensions is unbelievable. He’s based in Rio but he travels, so clients book him to go to Europe, Turkey, everywhere. He puts the hair at the hairline, so you cannot see it. You can go to the beach, wear it messy, straighten your hair, and it always looks perfect.”

“She is an artist. She did my belly, my chin, my tits…. After the surgery, which is done in a hospital, she has a clinic where you can stay to recover. They take care of everything, so when you leave, your scars are healed and perfect.”

“They do fillers, eyebrows, lasers for the skin. They are very good. I also had a tattoo removed there.”

“The drainage massage is amazing. It’s not one of those massages that is too soft and not the one that kills you. It’s perfect. And if you do this every day or every other day, your body is just, Woo! Renata has a training method, so you can find someone who trained in her technique [all over] the world.”

SkinCeuticals Light Moisture UV Defense SPF 50: “I use this to protect my face.”

CVS Health Acne Spot Treatment: “I borrowed this from a friend and when I woke up, my skin was so fucking soft.”

Thank you to the Sheraton Grand Rio Hotel & Resort in Rio de Janeiro for hosting this shoot. The property has a stunning beachfront swimming pool, tropical indoor and outdoor dining, and is a short walk to the famous Copacabana Beach mosaic boardwalk.