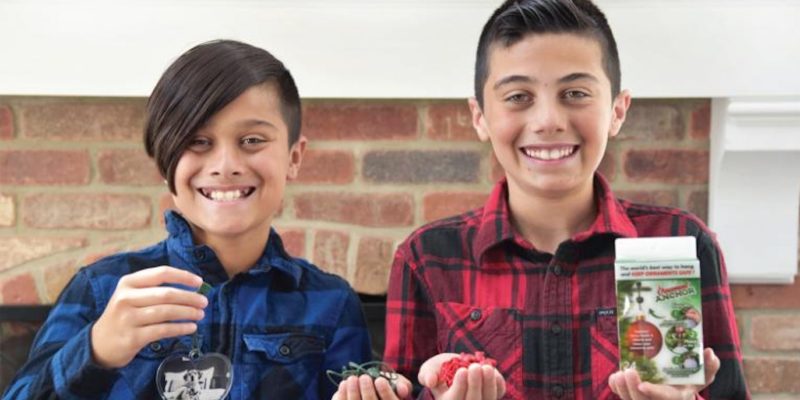 
According to tradition, January 6 (also known as the twelfth day of Christmas) is when you are supposed to bring down your Christmas tree. Sadly, many people, while wrapping precious ornaments until the next Christmas season, may come across some short memories.

Ornaments are fragile things. All it takes is a curious cat, a running child, or even the wrong sweep of a vacuum cleaner sucking up missing needles to destroy a treasured family memory.

And that’s precisely what inspired a pair of 12-year-old entrepreneurs to take action.

Brothers Ayaan and Mickey Naqvi, who live in Shelton, Connecticut, were decorating their family’s Christmas tree last year when one of their favorite ornaments succumbed to the forces of gravity. (The family’s beloved dog, Zara, whose tail Ayaan describes as a “bauble missile,” may also have played a role.)

While the decoration on the tree in question could not be repaired, a brilliant idea emerged from its broken fragments: what if there was a better way to hang ornaments so that they were truly safe?

From that epiphany, the Ornament anchor born.

Using a loop and toggle system, Ayaan created the prototype and presented it for a school project. The reception was overwhelmingly favorable; So favorable in fact, the boys quickly decided to turn their invention into a potential money-making proposition.

“My brother and I worked together to design the product, patent it, create an amazing website, calculate profit margins, and we did our own market analysis,” Ayaan said. CNN. “We did everything to the point where every month was Christmas.”

This wasn’t the kids’ first commercial invention rodeo – an earlier device led the couple and their family to an episode of Shark Tank. While they didn’t make a deal, it was a true learning experience.

RELATED: A selfless teenager is a local hero after commuting during the blockade to clean up dirty road signs and cut through city hedges

Out of $ 1,000 in sales in six hours at a local Christmas trade show, the Ornament presenter was showcased on Good Morning America and featured on QVC. In one year, the brothers’ creation has raised more than $ 250,000.

Full of success, Ayaan and Mickey are determined to pay off their good fortune by donating 10% of their profits to local animal shelters. “Since I was very young, I have had a fascination for all the creatures in life,” Ayaan explained. “My goal is to help as many animals in need as I can.”

The guys admit that starting a new business in 2020 has had its challenges. While enjoying their well-earned windfall, adjusting to distance learning and other limitations of the coronavirus lockdown was not easy.

PLUS: Tennessee Teen raises thousands of dollars for food banks by making and selling its own vanilla – WATCH

Through the turbulent times, they say they have only tried to take things step by step and stay positive because that, along with the love and support of their family, is what keeps them grounded.

Doug Bopst on Personal Responsibility and Becoming Your Own Hero