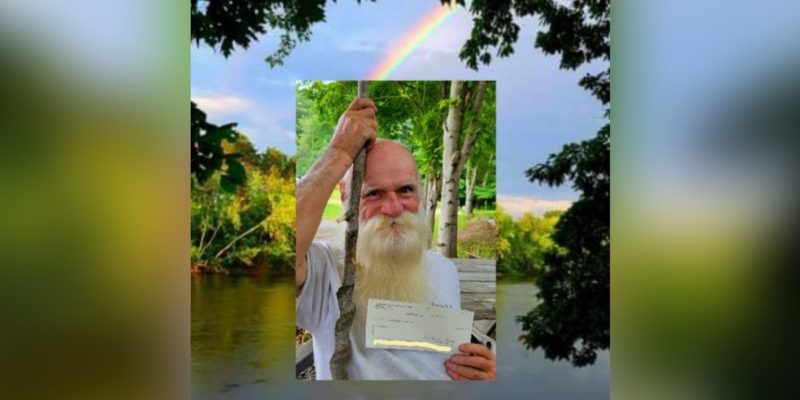 
A self-proclaimed hermit who inadvertently became famous after losing his home to a fire is about to get new digs thanks to generous donations to a GoFundMe campaign and a huge check from a philanthropist.

81-year-old ‘River Dave’, whose real name is David Lidstone, had been living off-grid in the same secluded New Hampshire spot for nearly three decades. He did not own the property where he had built his modest A-frame cabin on the banks of the Merrimack River, but says he had permission from the site’s previous owner to stay there.

However, citing zoning and environmental violations, the current owner took steps to have him evicted. On the same day that Lidstone appeared in court charged with civil contempt for refusing to vacate, his cabin was burned to the ground.

While the cause was likely more accidental than arson, the result remained the same. River Dave, along with his cats and chickens, was out and about.

Separated from his wife and family, for most of his 27-year tenure on the 73-acre wooded parcel, Lidstone was left alone. However, he occasionally befriended a passing kayaker or boater, and those ties proved strong enough to form an unexpected lifeline.

Before the legal setbacks, longtime friend Jodie Gedeon hoped that the situation between the landowner and Lidstone would come to a peaceful resolution. The owner’s attorneys thought otherwise, but after the fire, the point became moot.

With Lidstone now homeless, Gdeon and her friend Sharon Copello quickly organized a GoFundMe page to help River Dave recover. As news of their plight spread, donations and offers of places to stay began pouring in.

PLUS: Warren Buffett Donates Another $ 4.1 Billion To Charity As ‘World’s Most Successful Investor’

While the response was staggering and the initial funding goal of $ 15,000 was quickly met, no one could have predicted what would come next.

On August 11, New Hampshire resident and billionaire CEO of Palantir Technologies, Alexander Karp, approached Lidstone and wrote him a personal check in the amount of $ 180,000 for living and future expenses.

“I hope each of you is sitting down and has a tissue or two by your side as what I am about to share is part of the happy ending that is coming and I can’t imagine a dry eye anywhere after reading this,” Gedeon posted on his Facebook page of the generous donation.

Lidstone needed some tissues too.

How can I express myself and express my gratitude for something like that? I start crying every time I think about it, “Lidstone told the Concord monitor. “For an old lumberjack who always had to work, for someone to give you that kind of money, it’s incredibly difficult for me to understand.”

The money raised for River Dave is put into a trust for him. For privacy reasons, you will be staying at an undisclosed location for the winter, and sometime next year, on a still unnamed construction site, you will begin construction of your new home.

“I feel as good as I have ever been in my life,” a grateful Lidstone told the AP, though he admitted that the recent show of kindness and support has been something of a revelation for him. “Maybe the things I’ve been trying to avoid are the things that I really need in life … I grew up not being hugged or kissed, or [having] any close contact …

“Someone once asked me about my wife: ‘Did you really love her?’ And the question surprised me for a second. [I’d] I never loved anyone in my life. And I was surprised because I had not realized that. And that’s why he was a hermit. Now I can see a love being expressed that I have never felt before. “

Meanwhile, as the GoFundMe campaign wraps up in late August, Gedeon hopes to keep paying the love.

“We believe that we can help Dave build a good life now and we will be forever grateful,” he posted. “We also know how many other charities and people need help. At the end of the month, we ask that the spotlight be passed on to others to generate awareness and opportunities to spread love and continue to be the change!

“The world is a better place with each of you in it and we just can’t thank you enough.”

FLOAT Friends Along a River of Good News; Share this story …

See the Stunning Winners for 2021