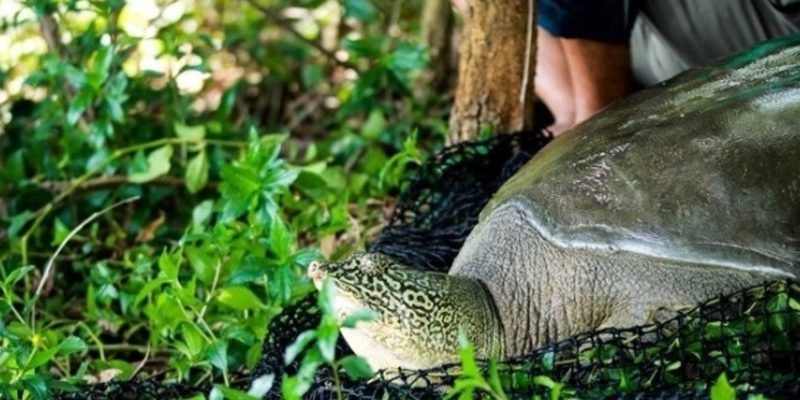 
After a female Swinhoe softshell turtle was discovered in a lake in Vietnam, hope that the world’s most endangered species of turtles could rebound was ignited among conservationists in Asia.

Giving a whole new meaning to the words “on the brink of extinction” was a living turtle in captivity. ‘He’ It was thought to be the only one on Earth, and with the discovery of a healthy adult female, the opportunity for a reptilian version of Adam and Eve may begin.

The female weighed 86 kilograms (189 pounds) when she was found in October in the 1,400-hectare (3,459-acre) Dong Mo Lake. After she had blood tests taken and a tracking device fitted, she was returned to the lake.

The last remaining male tortoise lives in a zoo in Suzhou, China, and after DNA testing confirmed that the discovered female was a member of the same species, scientists assured reporters that the animals would have a chance to reproduce.

Also known as the Hoan Kiem turtle or Yangtze giant softshell, it was literally driven to the brink by overhunting for its meat and eggs. The individual previously thought to be the last female died in captivity in April 2019 during a breeding program that failed to produce offspring.

The conservationists involved in the confirmed DNA test and capture were understandably ecstatic.

Wildlife Conservation Society Vietnam Country Director Hoang Bich Thuy said: “In a year full of bad news and sadness around the world, the discovery of this female may offer some hope that this species has another chance to survive.”

PLUS: New species, devil-eyed frogs and satyr butterflies not seen in a century found in forests 30 miles from the capital

“In Vietnam, with the leadership of the government, we are determined to take responsibility for giving this species another chance.”

Andrew Walde, COO of the Turtle Survival Alliance, technical advisor on this project, said: “This is the best news of the year, and possibly the last decade, for global turtle conservation.”

“As the most endangered turtle on Earth, an enormous amount of energy and resources have been devoted to the preservation of the Swinhoe softshell turtle.”

Authorities suspect that another turtle, in addition to the female, survives in Dong Mo Lake and perhaps another according to recent sightings in nearby Xuan Khanh Lake.

CHECK OUT: Small pygmy possums discovered on Kangaroo Island after wildfires wiped out them

The same respective organizations plan to conduct a search of the two lakes for the alleged turtles in 2021 when the water level is at its lowest.

SHARE the big news from Vietnam with friends on social media …