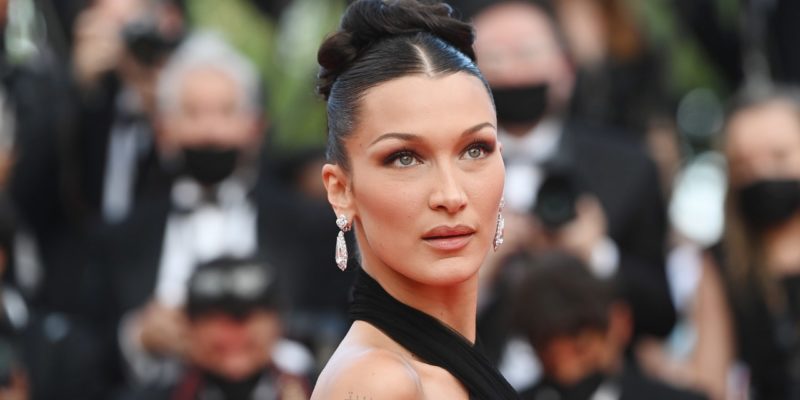 It has been quite the week for Bella Hadid‘s hair, to say the least. On Thursday, July 29, the supermodel shared some photos of herself posing in a sparkly black dress with a dark brown curly updo via Instagram. Two days later, on Saturday, July 31, Hadid took to Instagram again and posted more photos of herself — this time, in a blonde wig. She topped off the week of experimental hair content with some TikTok videos that she shared on Sunday, August 1.

The one that really blew our minds, though, showed her sporting a two-tone wig, which is something that we haven’t seen yet from Hadid. She begins wearing a wig cap while sitting in a dressing room. Then, it transitions to show her all glammed up in a two-tone wig. The ends of her chin-length bob and bangs look as if they were perfectly dipped in bleach, while the rest of the hair is medium brown.

Hadid’s two-tone hair is not the only contrast that’s going on here. Her wig comes slightly above her chin, which is completely different from her natural cut that goes down past her chest. This chic, experimental hair moment was also topped off with a bright-red lip, a slick of mascara, and some brown eye shadow on the lids.

As always, Bella looks unbelievably gorgeous with this hairstyle and color. As indicated by the content she’s posted over the past few days on both Instagram and TikTok, it looks like there isn’t an end in sight to her hair experimentation days. We wouldn’t mind if the two-tone bob becomes permanent, though, because we’re obsessed.

How Black Gymnasts Style Their Hair for Competition