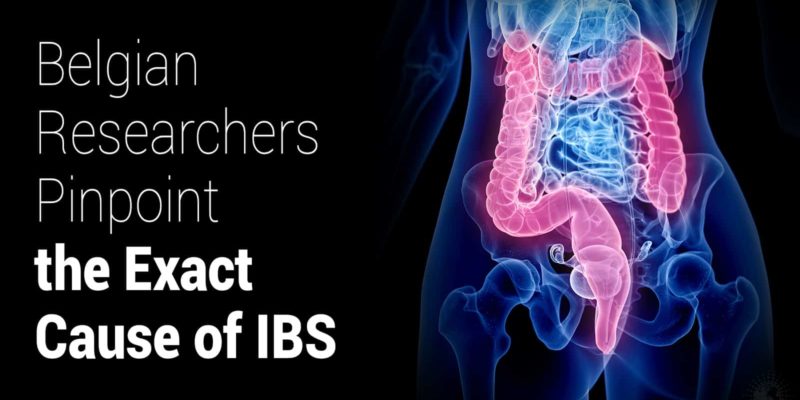 Belgian researchers have recently traced the cause of IBS to certain biological mechanisms in the body. The KU Leuven team hopes their findings will lead to better treatments for IBS and other gastrointestinal disorders.

The study, published in Nature on January 13, 2021, it was performed in both mice and humans.

About 20% of people worldwide suffer from irritable bowel syndrome (IBS), which causes severe abdominal pain or discomfort after a meal. Other common symptoms of IBS include:

The cause of IBS may include the following:

As you can imagine, this disorder can seriously affect everyday life. While remedies like gluten-free diets can help, scientists are still puzzled as to why this works. Since patients do not have allergies to gluten or other foods, the researchers believe there is a deeper biological reason behind this.

“Very often, these patients are not taken seriously by doctors, and the lack of an allergic response is used as an argument that this is all in the mind and that they have no problem with their intestinal physiology,” says Professor Guy. . Boeckxstaens, a gastroenterologist at KU Leuven and lead author of the new research. “With this new knowledge, we provide further evidence that we are dealing with a real disease.”

How histamine plays a role in IBS

The Belgian team identified a mechanism that activates when histamine foods Are consumed. Histamine, called mast cells, can cause pain and discomfort in some people. Previous studies by Professor Boeckxstaens and his colleagues found that blocking histamine leads to improvements in people with IBS.

However, in a normally functioning gut, the immune system does not overreact to food. So the scientists wanted to identify the mechanism that causes histamine intolerance. People with IBS frequently report that they begin to have symptoms after contracting a gastrointestinal infection such as food poisoning. So the scientists decided to study how an infection in the gut could cause a exaggerated immune response to a particular food.

They began by infecting mice with a stomach virus and simultaneously feeding them ovalbumin. It is a protein in egg whites that is frequently used in experiments as a model for food antigen. Antigens are molecules that trigger a reaction in the immune system. Once the mice were over the infection, the researchers gave them ovalbumin again to test their immune response.

Results of the study on the cause of IBS

The team found that ovalbumin alone triggered a histamine release. This caused digestive intolerance and abdominal pain in the mice. However, mice that did not contract an infection or receive ovalbumin did not have this response. The researchers were then able to identify which events in the immune response connected ovalbumin to histamine release.

The scientists found that the infection triggered an immune response only in a specific part of the intestines. In other words, the team did not observe more general symptoms typical of a food allergy. Professor Boeckxstaens explains that this finding suggests a spectrum of food-related immune diseases.

“At one end of the spectrum, the immune response to a food antigen is very local, as in IBS. At the other end of the spectrum is a food allergy, comprising a generalized condition of severe mast cell activation, with an impact on respiration, blood pressure, etc. “

Next, the researchers wanted to see if people with IBS had the same reaction. The team injected food antigens related to irritable bowel syndrome (gluten, wheat, soy, and cow’s milk) into the intestinal walls of 12 patients. They found that the antigens triggered a localized response like that seen in mice. In healthy volunteers, the team said there was no reaction.

However, since the sample size was so small, more studies will be needed in the future. However, so far, the research appears to be promising, with previous clinical trials showing that IBS patients improved on antihistamines. A larger clinical trial of antihistamine treatment is currently underway.

“This is further proof that the mechanism we have discovered has clinical relevance,” says Professor Boeckxstaens.

“But knowing the mechanism that leads to mast cell activation is crucial and will lead to new therapies for these patients,” he continues. “Mast cells release a lot more compounds and mediators than just histamine, so if you can block these cells from activating, I think you will have a much more efficient therapy.”

Final thoughts: researchers believe histamine release in the intestines is the cause of IBS

In this groundbreaking study, a Belgian research team discovered that a biological mechanism that triggers the release of histamine can cause IBS. They also found that people are more vulnerable to developing IBS after suffering from food poisoning or other infections. The team hopes that their research will lead to better treatments for IBS in the future.

Poetry Calls Us To Pause