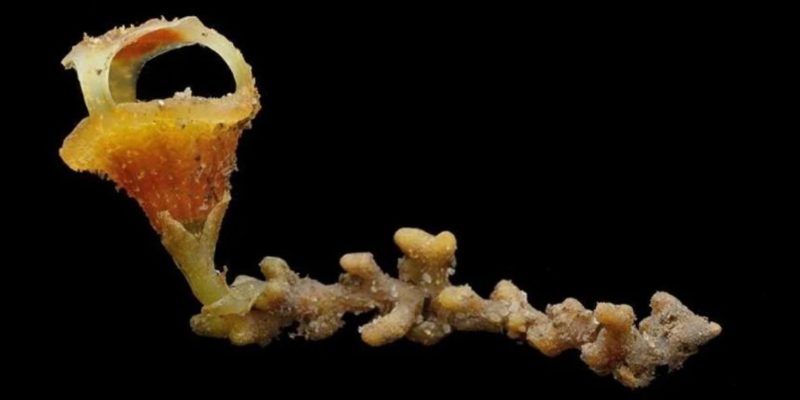 
The so-called ‘fairy lanterns’ are among the most extraordinary looking flowering plants.

These curious leafless plants (genus Thismia) grow in the darkest depths of remote rainforests, where they are rarely seen.

There are about 90 species worldwide, distributed in the forests of Asia, Australasia, South America and the United States. All lack true leaves and chlorophyll, and get their food from root-associated fungi that they share with other green plants.

Its mysterious flowers emerge briefly and often under leaf litter, so few people are lucky enough to find them.

Scientists from Oxford and Malaysia have just described a completely new kind of fairy lantern for science.

It was first discovered by rainforest explorer Dome Nikong in 2019 who surprisingly found the plant growing along a popular tourist trail in Gunung Sarut, a mountain located in the Hulu Nerus Forest Reserve in Terengganu state. .

In February 2020, Dome Nikong was joined by a team of botanists that included researcher Siti-Munirah. To his dismay, the only known ‘fairy lantern’ plants had been destroyed by wild boars except for a single fruitful specimen.

By examining the little material collected on the two trips, Siti-Munirah and Dr Chris Thorogood, Scientific Director of the Oxford Botanic Garden and Arboretum, were able to describe and illustrate the new species.

They examined the architecture of the flower: its shape, color, and surface characteristics. They discovered that it has a unique and peculiar orange flower, similar to a lantern, with pillars supporting a so-called ‘miter’, an umbrella-like structure, whose function is a mystery.

Together, the scientists named the plant Thismia sitimeriamiae after Dome’s mother, Siti Meriam, in honor of her support for her life’s dedication to conservation work in Terengganu, Malaysia.

The unique and remarkable “miter”, color and texture of the plant surface make Thismia sitimeriamiae one of the most striking plants ever described in Peninsular Malaysia.

MORE: A Dutchman famous for cleaning up the Pacific garbage patch is now cleaning the world’s rivers too

Dr Chris Thorogood says: “The extraordinary architecture of the flower raises interesting questions about how it pollinates.

Other species seem to be visited and pollinated by small fungus gnats, but the truth is that we know little about the ecology of these plants, they are a mystery. The truth is that the plant is exceptionally rare, it has only been seen twice. The plant’s conservation status is Critically Endangered (CR) according to IUCN criteria.

RELATED: This wonderful tree is a game changer for rainforest agriculture in Honduras and deforested sites around the world.

Scientists recommend in their article, published in the magazine Phytokeys, that more inspection work is needed to bring the fairy lanterns out of the dark and inform the conservation priorities of these mysterious plants.

(LOOK botanists on their adventure below.)

Wise Woman Shares an Inspiring Message About Knowing Your Self-Worth