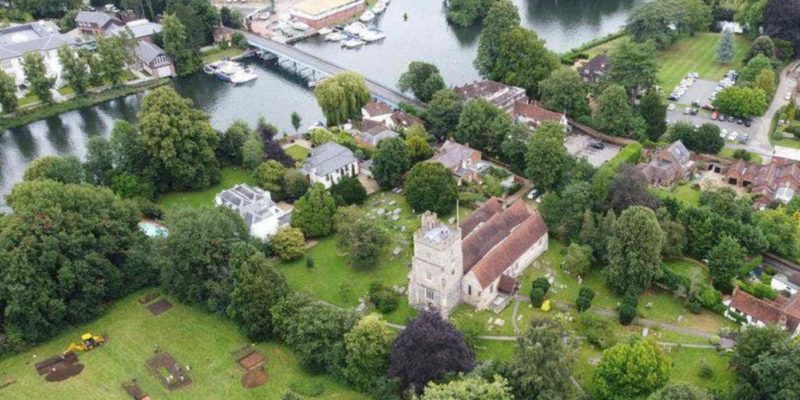 
The seat of power of one of the most influential women in medieval English history, Queen Cynethryth, has been discovered in a small Berkshire town.

A lost monastery in Cookham where Cynethryth ruled as abbess was located by a team from the University of Reading and local volunteers, and consists of the wooden remains of the buildings where the monks and nuns lived, as well as artifacts such as jewelry, crockery and things personal.

Cynethryth was the wife of King Offa. The two ruled the ancient kingdom of Mercia in the four decades prior to the arrival of the Vikings in AD 793, and they were determined to bring Christian values ​​and better court decorum to their land.

“Cynethryth is a fascinating figure, a female leader who clearly had genuine status and influence in her life.” said Dr. Gabor Thomas, an archaeologist from the University of Reading who led the excavation.

“The elements that have been discovered will allow us to reconstruct a detailed impression of how the monks and nuns who lived here ate, worked and dressed. This will shed new light on how Anglo-Saxon monasteries were organized and what life was like in them, ”he said.

While details of almost anyone who lived in Britain during this period, even a king or queen, are scarce, two examples bear witness to the power that Cynethryth wielded during his lifetime.

The coins minted during the reign of Offa and Cynethryth showed his face, one of the few examples in all of Western Europe, much less in England, and when King Offa exchanged letters with his counterpart in France (Charlemagne), who was considered equal . , Charlemagne addressed the letters to Offa and Cynethryth by name.

A writing by Susan Abernethy in The Medievalists tells us that people in the know, in this case an English poet / teacher / scholar / ecclesiastical figure named Alcuin who was a contemporary of Offa and Cynethryth, considered her very important.

PLUS: Farmer leads scientists to fossilized egg of a prehistoric giant tortoise, with a telltale embryo inside

“In a letter that Alcuin wrote during Offa’s reign, he hints that Cynethryth was too busy with the king’s affairs to read the correspondence.” writes Abernethy. In another letter he designates her as “mistress of the royal house” and calls her pious. Alcuin emphasizes the legitimacy of his marriage to Offa and the legitimacy of his children and their suitability to inherit the throne of Mercia.

The discovery of her monastery was made along the River Thames on the grounds of the modern Church of the Holy Trinity, a rumored location of the monastery where, after the death of her husband, she ruled as “royal abbess” from AD 796 to his death. .

The position of the monastery along the Thames is not only Berkshire’s modern border, but during the 790s it was also the disputed border between Mercia and another medieval kingdom called Wessex, highlighting the political and strategic importance of the site. .

RELATED: King Khufu’s solar ship is on the move after 4,600 years next to the pyramids of Egypt

Livia Gershon, writing for Smithsonian reports: “Excavations showed that the building was built on a gravel island that raised it above areas that faced frequent flooding. The site was divided into zones, including a residential area and another with a group of homes that were probably used for metalworking. “

As a religious and royal figure, the Reading team hopes that her remains will be found at the site, an incredibly exciting potential discovery, as the physical remains of a person can be used to create 3D images of what the mighty queen might have. . looked like.

Manifestation of Your Dreams Comes From These 10 Habits

How to Create a Meditation Space in Your Home