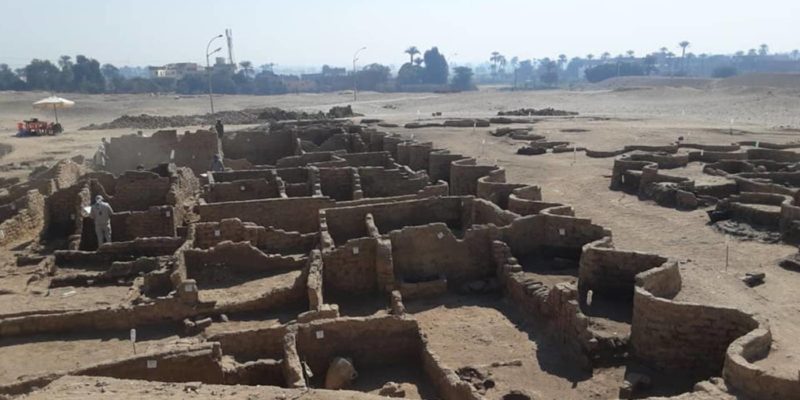 It is the stuff of dreams and is being hailed as the second most important discovery since the opening of Tutankhamun’s tomb: an ancient lost city has been found near the famous Valley of the Kings.

Excavations began 6 months ago in September some 300 miles south of Cairo, and before long “to the great surprise of the team, mud brick formations began to appear in all directions.”

These are the words of the famous Egyptologist and former Minister of Antiquities Dr. Zahi Hawass, who published a statement. of discovery on Facebook.

Identified as “Dazzling Aten”, it is the largest lost city ever discovered in Egypt, and dates from the reign of one of the most powerful pharaohs who ruled during the kingdom’s golden age, Amenhotep III.

Governing from 1391 to 1353 a. Along with his son, the equally famous Akhenaten, Hawass described his city as “in good repair, with almost complete walls and rooms full of tools of daily life.”

RELATED: Egypt just discovered 27 sealed coffins in an ancient cemetery that were buried 2,500 years ago

“Many foreign missions searched for this city and never found it,” he added. “We started our work looking for the mortuary temple of Tutankhamun because the temples of Horemheb and Ay (two other important pharaohs) were found in this area.”

A golden city ‘full of treasures’

With zigzag walls, a rarity in ancient Egypt, the favorite places of specialized artisans, such as brickmakers, glassmakers and jewelers, have been discovered, along with evidence of their work, such as the seal of Amenhotep III that would have been used to stamp on bricks. of clay that probably built several nearby monuments, such as the Temple of Ramses II.

MORE: A team of nonconformist engineers wants to turn back the geological clock in Sinai and replace the desert with lush vegetation

Other districts for baking and storing food on a large scale were also discovered, and archaeologists determined that they would have been able to house many workers at once, probably for festivals and funeral ceremonies.

To the north of the site, a cemetery has also been discovered, although the extent and state of conservation have not been determined. They consist of rock-cut tombs that can be “accessed via rock-cut ladders,” similar to the tombs in the nearby Valley of the Kings.

“The work is underway and the mission hopes to discover virgin tombs full of treasures,” says Hawass, swinging the most fantastic and metaphorical carrots in the face of global archeology.

Al Jazeera Reports that many of those treasures have already been found, such as scarab pendants, jewelry, and ceramic inscriptions that speak volumes about a critical period in Egypt’s history that experts still baffle.

“The discovery of the Lost City will not only give us a glimpse into the life of the ancient Egyptians at the time when the Empire was richest, but will help us shed light on one of the greatest mysteries in history: why why Akhenaten and Nefertiti decide to move to Amarna, ”said Betsy Brian, an archaeologist at Johns Hopkins University.

While the city was presided over by Amenhotep III, his son Akhenaten moved the capital to Amarna after his death, but historians are unclear why. An inscription on the outside of a pot containing meat for a ceremony dated the activity in Aten to just a year before it was supposedly abandoned.

CHECK: Archaeologists in Egypt have discovered the oldest known brewery in the world, believed to date back 5,000 years

Hawass and the other researchers hope that further excavations will reveal why this happened and then whether the city was repopulated when Tutankhamun decided to move the capital to Thebes.

It is a discovery and a story that should produce fascinating developments in the coming years, and something that could give a positive shake to the Egyptian tourism industry after years of political instability.

SHARE this incredible find with friends on social media …