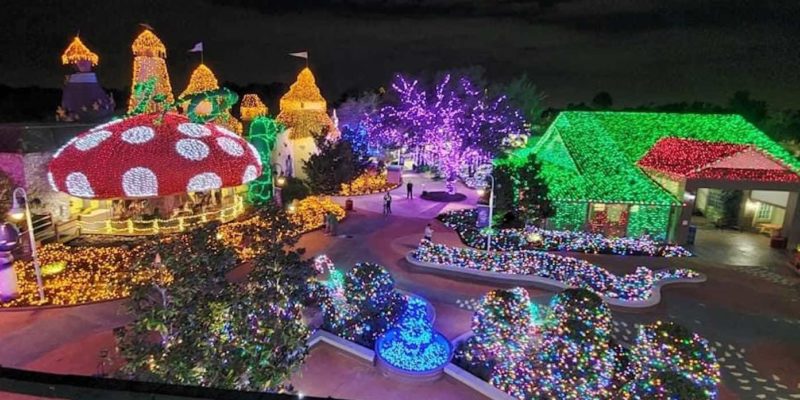 Sets include a giant mushroom, an ice cream palace spaceship, and a giant upside down toy box. They all light up the night sky in Kissimmee as part of ‘Night of a Million Lights,’ a tour show made up, in fact, of more than 3.2 million lights.

Give Kids The World, a nonprofit community that provides vacations to sick children and their families, opened the dazzling exhibit in November, and the proceeds will be used to support the fulfillment of children’s wishes when the village reopens in January 2021.

“It’s just taking advantage of all the fancy things we have and bringing them to life with colors and lights,” said Pamela Landwirth, president and CEO of Give Kids The World.

A 150-foot tunnel, a gingerbread arch, and an entire miniature golf course are among the 45 villas that have been illuminated with lights donated by Walt Disney World Resort.

Launched in 1986, the charity typically serves more than 8,000 families in all 50 states and more than 70 countries in one year.

CHECK OUT: Stunning Christmas light display inspires 13-year-old girl with autism to speak up for the first time

After having to temporarily close their doors in March due to COVID-19, they began to think of ways to continue bringing joy to people.

Since its inauguration, almost every night of the socially estranged light event has been sold out.

The show is projected to raise more than $ 3 million in charitable profits, with 90 cents of every dollar going to directly fulfill the wishes of critically ill children during their time in the Village.

Tickets and more information can be found here on the non-profit organization’s website. The show continues until January 3, 2021.

“We look forward to sharing a little Christmas cheer with the community,” said Pamela, “while making it possible for future children to wish to fulfill their wishes.”

SHARE the light and send this brilliant story to your friends …