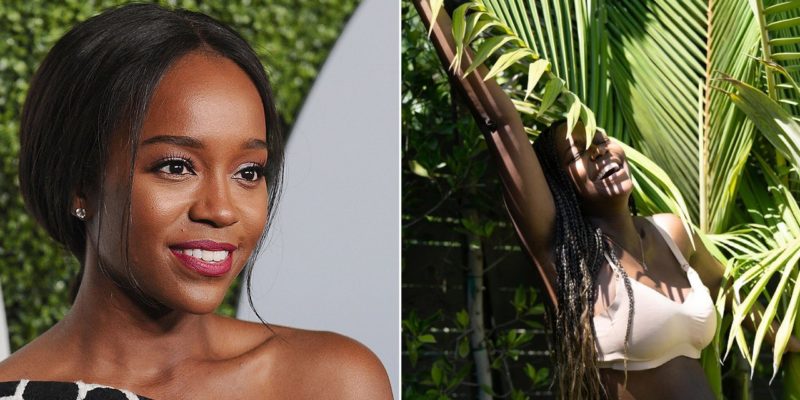 Am I the only one that, until embarrassingly late in my life, had no idea that people’s baby bumps didn’t just magically disappear right after giving birth? I can’t be, because let’s face it: we’re constantly faced with tabloid headlines and TV segments about celebrities who “got their bikini bodies back” after giving birth. We’re used to seeing swollen, nine-months-pregnant bellies one day and flat, toned ones out of nowhere a few weeks later. We rarely see the diets, workouts, procedures, and everything else in-between, making it easy to believe that a body can just return to the way it was after literally pushing a tiny human out of it.

But that’s definitely not how people’s bodies function, which is what Aja Naomi King wanted to highlight with her latest Instagram post. The actor revealed on June 6 that she had given birth to her first child by posing in her underwear and proudly revealing her lingering baby bump.

“No, this is not a pregnancy Before picture,” she captions her Instagram slideshow. “This is the After. After days of labor. After experiencing what felt like my insides being ripped apart, no lie. After experiencing the unimaginable beauty of childbirth, this is what is left behind. This Gorgeous Body!”

King goes on to say that she intentionally skipped makeup, editing, and filters in the photos. “Just Me…a woman in awe of her Body and her Baby,” she writes. Whew, what a message.

Folks say stuff like this is all the time, but it still warrants repeating: people who give birth literally create life in their wombs and then push people out into the world. Why should we ever expect their bodies not to change after that? If a person wants to lose weight right after giving birth, that’s their totally valid prerogative — but images like King’s remind us that those in-between stages, the ones we rarely see, are beautiful, too.

Everything You Need To Know About Curcumin Supplements