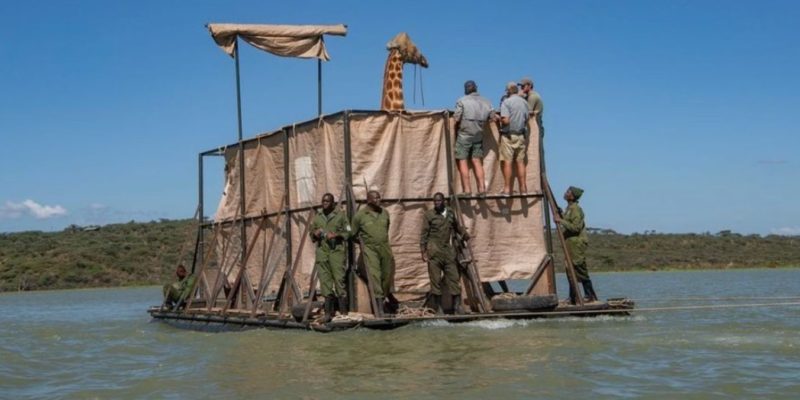 
Trapped on a shrinking island in the middle of a flooded lake full of crocodiles, eight endangered giraffes face a challenge that would preoccupy James Bond.

But conservationists, government officials and members of the local community from the Ruko Community Wildlife Conservancy in Kenya jumped into action to try to build a “giraffe raft” to transport them across the lake to safety on land.

Stranded giraffes belong to the Rothschild subspecies of giraffes, of which only 1,600 remain in the wild, making it one of the most threatened distinct populations of giraffes. Longicharo Island in Lake Baringo was not always an island, but a peninsula that became one after years of intense flooding.

The giraffes, which were moved there to keep them safe in 2011, were fed and healthy by rangers who traveled to the river in boats. With more flooding on the horizon, authorities agreed that as the island continues to shrink, the threat of losing valuable animals was too great.

As one of the largest of its kind, building the giraffe raft was no mistake. It would have to be a strong boat, balanced back and forth.

Rothschild giraffes can stand up to 20 feet tall (5.8 meters) and weigh up to 2,500 pounds (1,133 kilograms). Also, their high center of gravity meant that it would be particularly dangerous to hold them upright in a boat, especially if the sight of a crocodile scared them off.

For several months, the giraffes became familiar with the rescue craft until the team sedated and blindfolded Asiwa, an adult female, and made the journey successfully.

Gizmodo exchanged emails with David O’Connor, president of Save Giraffes Now, a non-profit organization that was involved in the daring rescue, who said: “The rectangular steel structure was designed and built specifically to transport tall and heavy giraffes.”

“The barge floats on a series of empty drums, to float. The reinforced sides prevented Asiwa from jumping out as the boats smoothly maneuvered the barge, ”he explained.

“Asiwa, she has always been a priority for the team on the field, as she was the most vulnerable,” read the triumphant Instagram post by Save The Giraffes “It is a relief to everyone involved to have brought her safely to the mainland and we are confident that she is enjoying the space in her new home.”

PLUS: There is an elephant baby boom in Kenya: thanks to the rains, a record number of births, including rare twins

Back on dry land, Asiwa and the other giraffes will be placed in a special 4,400-acre preserve with high, secure fences that will keep them safe from predators and poachers alike.

SHARE this heartening story with friends on social media …

Give Your Hair A Boost With A Homemade Spray