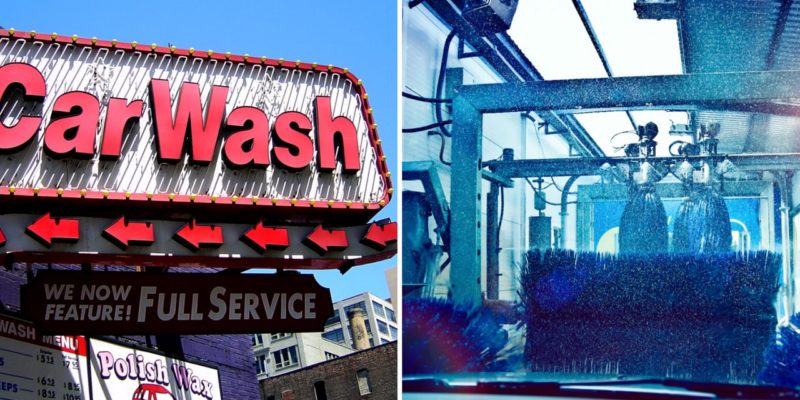 This weekend, in trending TikTok news: a woman has gone viral for going to the car wash to rinse out her bright red boxed hair dye. The user goes by @theonlykeef and her post — captioned “The salon experience. Watch the end!” — amassed more than five million views in just a little over a day.

“I wanted to look like Midnight Ruby,” @theonlykeef says at the beginning of the video while laughing and holding up a box of Splat’s No-Bleach Midnight Hair Color in the shade Ruby, her hands and forehead both drenched in red dye. Whoever is taking the video then says, “So where are we going?” to which she responds, “the car wash.”

Lo and behold, in the next clip, they’re at the car wash, with @theonlykeef holding up her hands to show how stained they are. “We’re waiting for my son to show up to block the other side of the car wash so no one will see me,” she says. “It is 40 degrees outside and I have to get out and wash this.” From there, she’s shown outside of the car with her head bent over while someone out of frame rinses her hair with what appears to be a heavy-duty power hose. It’s wild to see just how much dye comes out — even after hitting her hair with the hose for quite some time.

Naturally, people wanted to see @theonlykeef’s results, so she posted a follow-up video in which she shows off her new fire-engine red hair. In the video, her forehead seems to be dye-free, but you can see that her hands are still somewhat stained. “I want everyone to stop and read the warning label and before you do this,” she says, pointing to the directions on the box. “As you know, to get this out without running my porcelain bathroom or sink, I had to go to the car wash to get this stuff out of my hair. Was it worth it? Sure. Was it cold? Absolutely.”

Hilarity aside, we wouldn’t recommend this method at home, and neither would New York City-based colorist, Nikki Ferrara, who kindly weighed in on the matter with her expert insight. “So the only things I think that could be the issue here are that she didn’t add a protective layer around her face, and she definitely didn’t use the gloves provided,” she says via DM. “I also found it interesting that the instructions say it might stain surfaces so don’t rinse in the shower… I feel like this should be something that should be a salon-only product.”