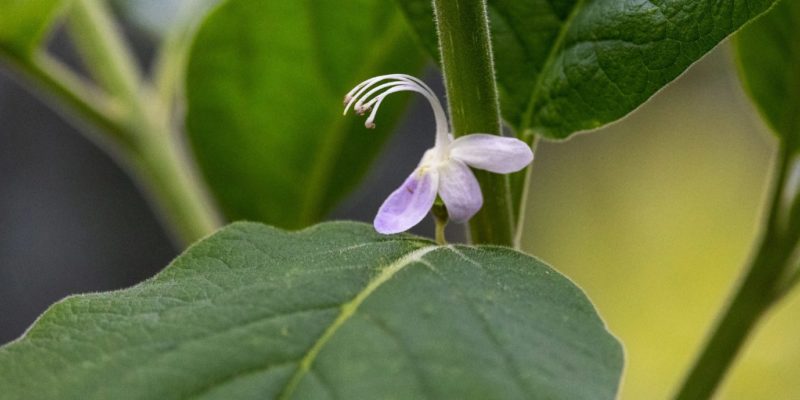 
In a greenhouse in Missouri, a tree listed as critically endangered produced a flower that has never before been recorded by science in the perfect metaphor for the species’ chances of survival.

The botanists who care for it believe there is no question that they can save the tree since they collected the pollen from this flower, as they can now cross-pollinate their thirty sapling neighbors to restore genetic diversity.

Karomia gigas It is a member of the mint family and is also related to oregano, rosemary, and thyme. It grows wild only in east-central Africa, in Tanzania and in the past in Kenya. It is so unknown that there is no common name for it in English, Swahili, or any other African language.

The flower it produced consisted of five purple petals pulled towards the stem and four long pollen stamens protruding from the center.

Growing to heights of 80 feet, it is believed that one of the reasons why there is no picture of the flower in the scientific record is that an adult K. gigas it does not branch halfway up the trunk, so rapidly withering flowers simply emerge too high to be seen.

The mint-free nature of the flowers leads scientists to hypothesize that it could be a self-pollinating tree, and they hope to find more flowers in the coming months that will allow them to strengthen the genetic diversity of the remaining trees.

They can clone individual trees from cuttings, but that does nothing to increase genetic diversity, which is key to ensuring the species’ long-term survival and ability to resist disease.

In addition to growing in a difficult-to-replicate type of soil substrate consisting mainly of old pens and termite remains, K. gigas it is very susceptible to fungi and its wood is similar to teak, so it is occasionally poached. All this pressure places the tree among the most threatened of the 60,000 known tree species.

It was discovered in Kenya in 1977, then rediscovered in Tanzania in 1993 after all the Kenyan specimens became extinct.

In addition to the thirty saplings growing in the Missouri Botanical Garden in St. Louis, the Tanzania Forest Service estimates that there are two dozen or more, but only in the Mitundumbea Forest Reserve and the Lithipo Forest Reserve in Tanzania, both of which are protected areas characterized by flat forests that used to be the bottom of the ocean.

“On the one hand, it’s a bit scary because very rare species like this depend on us and we can’t go wrong.” write Andrew Wyatt, Senior Vice President of Horticultural and Living Collections at the Missouri Botanical Gardens, the oldest continuously operating gardens in the nation.

“Personally, and I know other members of my staff feel that way too, it’s really amazing and inspiring. It is a great honor to use one’s ability to save a species from extinction. “

RELATED: The 100-year-old Galapagos giant tortoise found on Fernandina Island is in fact a member of an ‘extinct’ species

“Survival wise, we have this one,” Wyatt says, this time for National Geographic. “In fact, we can make sure it doesn’t go extinct. The idea of ​​actually preserving the species is entirely possible. It is protected in Tanzania. We have collections in the botanical garden. Once we have enough seed, we hope to be able to store it. [in a freezer] and create a buffer between losses. “

It’s good that he and his staff are so confident. Based on how many houseplants this reporter has killed, you can only imagine the pressure they are under.

MORE: ‘Huge surprise’ when a giant river otter thought to be extinct appears in a river in Argentina

Shepherd Hailed As a Hero, Braving Freezing Temperatures to Save 6 Runners in Chinese Ultramarathon