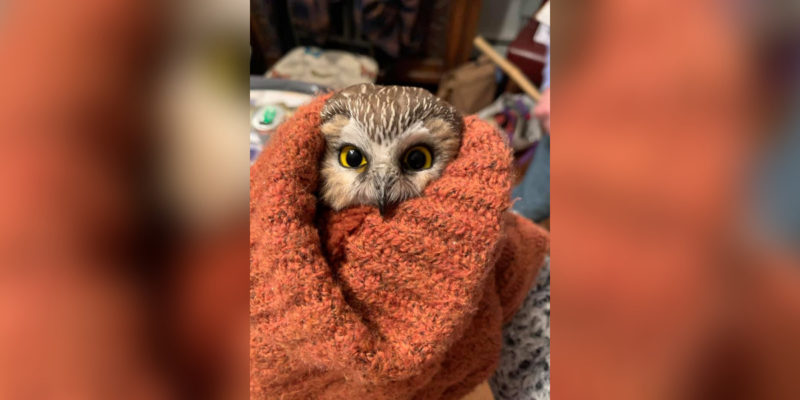 
According to a traditional Christmas carol, we should be on the lookout for partridges in pear trees this time of year, but one man found a very different kind of Christmas surprise this Monday: a little owl hidden in the Rockefeller Center 2020 Christmas tree.

When a worker who helped install the iconic New York tree discovered a tiny bird hidden among its giant branches on Monday, he called his wife. “The owl doesn’t fly away,” he said. “We need help”.

His wife called the experts in Ravensbeard Wildlife Center and asked if they were taking the owls for rehab. “Yes, we do,” a Saugerties staff member responded by phone. There was a moment of silence, then the wife said, “Okay, I’ll call again when my husband comes home, he has the baby owl in a box for the long journey.”

When a staff member met the husband halfway between New York and the shelter, they peeked into the box. It was not a bird. It was a small male saw owl, growing to be single 8.3 inches tall at full size.

Rescuers fed the owl and gave it fluids. Having made a 170-mile trip in a trailer from Oneonta, New York, to Manhattan on Saturday, I definitely needed the TLC.

Ravensbeard Wildlife Center Director Ellen Kalish said the owl was seen by a vet Wednesday and X-rays were taken, and has since been declared fit and healthy.

“It’s just a story out of a movie,” said Kalish, who now cares for the bird.

In the past few days, the little bird has “had an all-you-can-eat mouse buffet,” he said, so now he’s “ready to go back” to nature.

RELATED: Santa Claus has been named an essential worker and to add to their Christmas cheer, everyone is ringing a bell outside at 6pm.

As for the owl’s new name? Of course it is Rockefeller.

LISTEN to this story from your friends on social media …