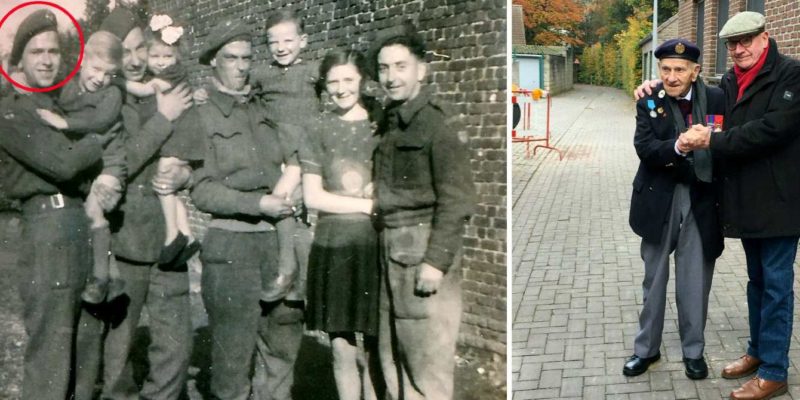 
A 98-year-old D-Day veteran has recreated a photo taken with a Belgian boy whose family took him in 76 years ago.

George ‘Bunny’ Avery was a sapper for the Royal Engineers and part of the second wave of troops that landed on the beaches of Sword Beach in Normandy on D-Day, June 6, 1944.

On that fateful day, his landing craft dropped him off shore and, as he made his way to the beach, he said he “kept running.” In his mind, he was saying to himself, “Keep your head down, boy!”

George advanced through Nazi-occupied Europe, building portable bridges that allowed troops and vehicles to travel at high speed across rivers and canals.

During his wartime journey across the continent, George stayed at a bakery in the Belgian town of Peer with a family who provided him with food and lodging.

It was 1944 and George and some other soldiers were building bridges nearby.

While staying with the town bakers, George became close friends with the 6-year-old boy in the house.

That boy’s name was Urbain, and when the family took a picture to remember their time with George, he and Urban were photographed holding each other.

RELATED: Losing their hugs, the quarantined children honor the veteran who spent thousands of hours guiding them through school

George’s daughter Kathryn recently discovered photos of the bakery, with a Belgian address written on the back. She started to do some research. In no time he managed to get in touch with Urbain. He said yes to meeting in the city of his childhood with Kathryn and her father.

Kathryn and her father often return to France, Holland, and Belgium to participate in liberation commemorations, but this gathering was particularly special.

MORE: Rather than put you in a nursing home, your grandson brings a 95-year-old WWII vet on an epic VR journey.

When they met, Urban was holding a photo showing George, who was only 23 years old at the time, carrying him.

George now lives with dementia and cannot remember his meetings with Urbain, but his Belgian friend still remembers those special moments with his soldier friend and told Kathryn about his joy in playing with George as a child.

75 years after they met, George and his Belgian had a photo taken in the same place where they were first photographed.

We are confident that Kathryn will treasure such a special moment captured forever.

SHARE this beautiful story with your friends on social media …

Carole Radziwill On The Beauty Culture of The Real Housewives