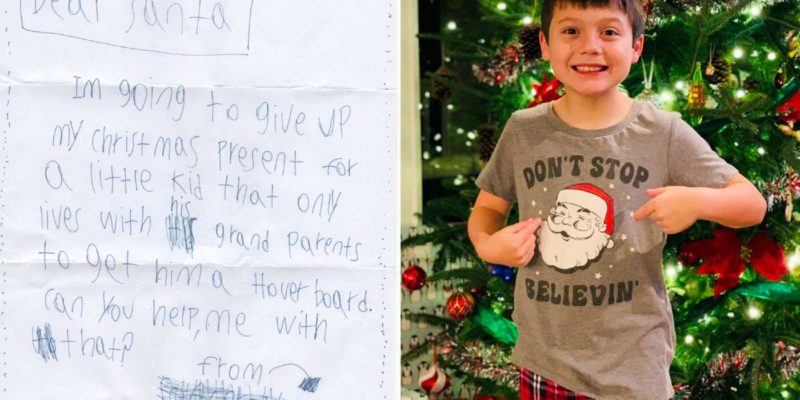 
A nine-year-old boy wrote a letter to Santa asking him to give his skateboard to a grieving boy who wanted the same gift.

Jason and Sandi Boyer, 41, wanted to help another family over Christmas and were anonymously paired with a young boy who was cared for by their grandmother.

The boy, who had just lost his grandfather to cancer, had a floating skateboard at the top of his wish list for Santa, as did his son Hudson.

When Hudson found out, he wrote to Santa and asked if he could give the other boy his Christmas present.

The Boyer family is on the mend – they’ll make sure both kids get their aerodynamic skateboard from Santa this year.

Meteorologist Jason from Asheville, North Carolina, said: “Every year we try to think of someone or organization to help, usually with a focus on children, and this year we found the Barry L. Joyce Cancer Fund in Madison.

RELATED: The Science About Santa’s Reindeer: They’re All Women Except Rudolph

“We were put in contact with a child who has no parents and was being cared for by his grandparents, but recently his grandfather had passed away with cancer.

“Now he only has his grandmother to take care of him and his siblings, so we knew they would be stressed and that this time of year would be difficult for them, particularly with the cost of medical care.

“We explained the story to our son and asked him if he would be willing to give up his skateboard for this little boy,

“He immediately said yes, which surprised us, because at that age you really don’t think they would do that.”

Sandi, a nonprofit executive, added: “We wanted to help a little boy who was the same age as Hudson to get home a little bit more, and he just happened to want the exact same thing as my son.

PLUS: Lowe’s does everything possible for the autistic boy who loves the store: crowning the 4-year-old as ‘honorary associate’

“I honestly thought he would forget about that after we told him. Then he simply wrote his letter to Santa. When he gave it to us, I cried. “

Cheers to a kid who is definitely on Santa’s “good guys” list this year.

SHARE the kindness and send this sweet story to your friends …

15 Reasons Why You Should Live With Intention