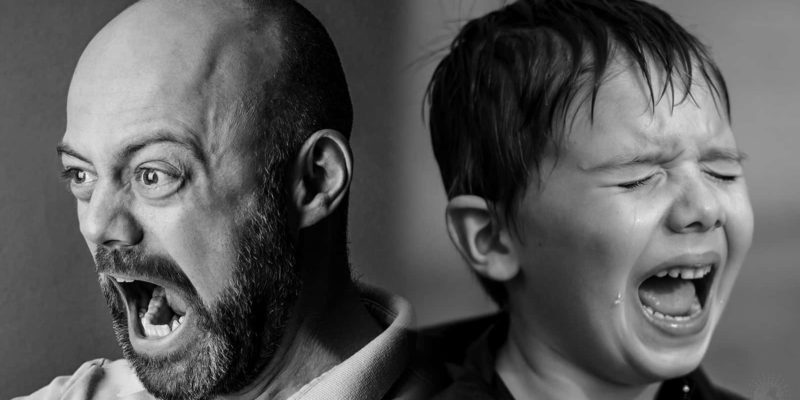 Childhood trauma comes with all kinds of side effects, and many of them don’t go away, even when you grow up. You may have learned negative strategies and coping mechanisms from your traumatic childhood and continue to use those methods to this day.

One of these mechanisms is anger, specifically explosive and powerful anger as a typical response to many difficulties in adult life. But why does this happen? Here are seven reasons why a traumatic childhood turns into adult anger.

When you have a traumatic childhood, your idea of ​​how you should interact with others gets warped. Children learn many vital skills from the people around them, and if those who raised you also hurt you, you have likely learned their gestures and behaviors.

The dangerous part of this is that you saw abusive, aggressive, and angry adults venting on you and even those who were in a similar position to you as a child. You learned from them that these angry behaviors weren’t just average, they worked.

Perhaps he used his outrage to achieve the following results:

And the truth, of course, is that anger often works for these purposes. The problem is, it can be unhealthy, counterproductive, and only works if you intimidate and pressure others with your anger. But you already learned that anger works. Also, you grew up surrounded by angry people. So you are used to doing things this way. You think it works, even if it is harmful in the long run, and it certainly works, even if they are not the most positive.

2. You are full of guilt over your traumatic childhood.

Many people who deal with childhood trauma begin to internalize the words and actions of those who traumatized them. They may even blame themselves for what happened to them, and if you are faced with this problem, you are not alone. This is one of the most common struggles adults with childhood trauma face, according to studies.

All of this guilt can make you angry at yourself, and your anger can be self-directed to the point where you self-sabotage, hurt yourself, or blame yourself for everything that goes wrong. This self-directed anger is just one of the many ways your childhood trauma can manifest as anger.

3. You consider yourself a victim

Childhood trauma may have robbed you of many things in your life, and knowing the ways you were hurt can be enough to make anyone angry. You know you were a victim in that situation and you may be filled with anger and rage towards:

All of this victimization-centered anger can hurt and result in unfairly directed anger in your daily life. While it is important to understand that you did not deserve what happened to you and that you really were a victim, it is also crucial not to let your entire life be defined by victimization.

There comes a point where anger at being a victim goes too far and leads to further victimization. You may think you have no other choice in your life due to your background, or you may blame all your current problems on your childhood trauma. This is not a positive way to deal with your past, nor is it a productive use of anger.

Remember, you are no longer a child. While your anger at your abusers is justified, it cannot be used as an excuse for your current predicaments. As an adult, you have options and it is up to you how you live your life. Don’t let yourself be defined by victimhood.

4. You don’t learn to manage stress in a positive way.

As a child, he was supposed to have a healthy environment where he learned to regulate his emotions and manage stress with mentors or father figures. But his childhood trauma may have meant that he never came to know those things, and the lack of those lessons throughout his life can manifest itself in all sorts of great emotions.

Stress management is often crucial in Anger control, And many people who have unhealthy levels and angry expressions have that anger bubble due to stress dysregulation. Many people with trauma end up with chronic stress, and it’s easy enough to see how this can turn into anger for many.

This is complemented by the fact that everyday stressors add even more to that pre-existing stress. You are constantly at a psychological disadvantage when faced with your daily life, and all that stress can erupt and explode into anger when you become overwhelmed and run out of ways to cope.

5. You repress it in projection

Anger is not always bad. Like all other emotions, it has a purpose, designed as a healthy response to situations where you are hurt or mistreated. But if you have childhood trauma, then you were likely treated badly as a child, and those who abused you would have forbidden anger as a response. In fact, being angry as a child could have resulted in more abuse thrown his way.

But all that anger has to go somewhere. But you repressed it in your brain, where it rots and grows behind the scenes in your subconscious. Since you cannot draw anger out, you must contain it. This disconnects you from your direct feelings of anger. You may have trouble noticing mild anger responses, or you may not be able to express any anger at lower levels to begin with.

But then, eventually, you will no longer be able to contain that rage. It has to go somewhere and it often comes out in confusing ways that can confuse and scare you. You can express that anger toward non-abusive family, toward colleagues, toward strangers, and even toward groups of people. You project your anger onto the world because you don’t know how to deal with it any other way.

This projected anger It hurts the people around you and is one of the reasons abuse can become generational, resulting in a cycle. Even worse, studies Show how pent-up anger can shorten your life. In other words, it is in your best interest to learn to better manage and direct anger rather than suppressing it until it is projected.

Feelings and emotions are an integral part of the human experience, and anger as part of that human experience is a good thing. But when you have childhood trauma, you have had to create a false version of yourself without these emotions because expressing and displaying emotions could get you in trouble.

Also, if the parent figures traumatized you, you probably would have tried to create a fake version of yourself to live up to their desires. You tried to become a child they could love, and you got so used to that mask that you continue to wear it today. Until you learn to drop the mask, your anger will remain suppressed.

6. You feel too exhausted

People often have an image of “Burned”Individuals that involve someone who is very sad or overtly a little anxious. But the truth is that emotional exhaustion consists of the development of apathy: you stop worrying and the things around you that demand your attention or emotional empathy tire you even more.

But how does this turn into anger? Well, you can:

7. You develop a survival response

Survival responses are common in those who experienced a traumatic childhood. To maintain a bit of sanity, as a child you needed to find ways to survive, and your brain did what it could to protect you. Anger is a valuable emotion for survival because:

These survival responses were essential to your, well, survival as a child. But now they replace positive thinking and put him in the mindset that he is still constantly under attack. Your brain continues to function in the survival mode that is learned, so your anger responses remain dominant.

You didn’t deserve the trauma you faced as a child, and as an adult you don’t have to deal with the effects of childhood trauma alone. A qualified therapist can help you overcome the anger, other emotions, and unhealthy coping strategies of a traumatic childhood. Remember that you deserve to heal and that recovery can be achieved by seeking help. Things will get better and your positive thinking will come back to you over time.

10 Behaviors That Reveal a Lack of Respect From Your Partner

10 Simple Habits to Open Up Your Root Chakra >>>