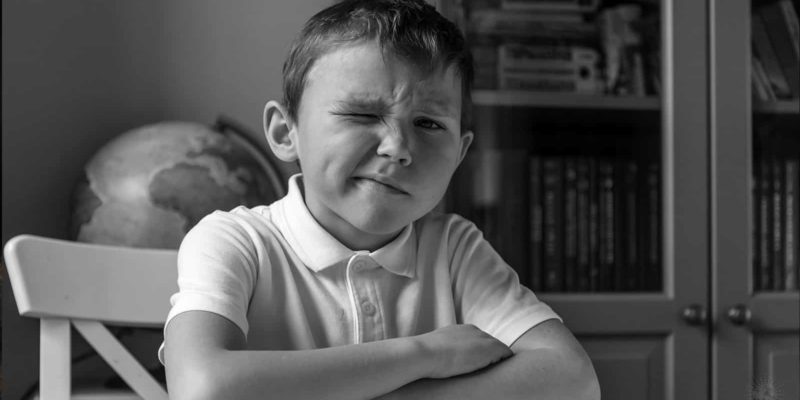 
Tourette syndrome (TS) is a neurological disorder that affects both children and adults. According to research, about 1 in 162 children has Tourette syndrome. Unfortunately, many children with TS go undiagnosed. As a parent, it is important to know the signs that could indicate that your child has this disorder. Here is a list of common TS symptoms in children.

This neurological disorder is named Dr. Georges Gilles de la Tourette, a French neurologist who discovered TS in 1885. It is characterized by involuntary and often repetitive movements or vocalizations called tics. The tics can last several seconds or several minutes. A common misunderstanding of TS is that patients shout inappropriate or obscene words and display obscene gestures, but these are rare behaviors and only add to stereotypical thoughts about TS.

Signs of TS usually appear in children between the ages of 7 and 10, but signs may appear at 2 years of age or earlier. Although it can appear until the age of 18, tics that begin after that age are not considered Tourette syndrome. Surprisingly, about 1/3 of children with TS do not have tics when they reach adulthood.

There are many symptoms of Tourette syndrome. Here are some that are more common, depending on the National Institute of Neurological Disorders and Stroke.

Children who have TS may also have these symptoms:

These signs could reveal that your child has Tourette syndrome.

A common sign of TS in children is a lack of understanding of social skills at an age when they should begin to practice them. Your child may not be aware of age-appropriate social skills, such as greeting, smiling, or playing with other children. At first you may think they are shy or need extra training, but as you notice other kids your age practice social skills, it is clear that your child has social problems.

The first signs of TS will be sudden and repetitive tics. Young children like to move around a lot and imitate others, but TS tics are different. Neurologists describe them as fast, repetitive movements., beyond what is usually seen in children.

The vocalizations of Tourette syndrome vary depending on the child. According to the Centers for Disease Control (CDC), these vocal expressions are common in the ST. They include:

As a parent, you may feel irritable about your child’s incessant repetition. At first, you may think that the child is doing these movements with the purpose of irritating you or a sibling. Notice what the tics look like and when they appear. Don’t assume it is behavioral. Never punish a child for these tics. This can make them worse and make your child feel like they don’t understand.

Your child’s tics may become more pronounced when he is excited about a special event or surprise. You may think that movements are a silly habit that your child does to show enthusiasm, especially if he is very young. Be on the lookout for these movements and when they occur. You will see a pattern emerge over time.

5 – Feeling of being out of control

Children with TS say they feel an urge or sensation just before the tics start. This is similar to when I feel a sneeze coming in. They may feel that they need to complete the tic a certain number of times to satisfy this urge or make it go away.

6 – Clothes can cause a tic

Your child’s clothing can cause tics. Your child may complain about tight collars or long sleeves and want to wear shorts or T-shirts when it’s cold outside. They may be frustrated by this and embarrassed if other children or adults mention their out-of-season clothing.

7 – Sounds can cause tics

Certain sounds can trigger rapid jerking movements from your child as if someone sniffing or clear your throat. TV shows can also trigger tics if there is barking or some type of repetitive behavior that your child imitates.

One sign that your child has TS is that they will continue to have tics even while they sleep. The tics may be less pronounced, but you will see them moving around a lot and the same kinds of movements that you notice during the day.

Some of the first signs of Tourette syndrome are jerking or repetitive movements of the head or neck area. Repetitive shrugging or head shaking is often the first thing parents notice, especially in very young children. It may be misinterpreted as typically silly childish amusement, but over time you will realize that it is not something your child can control.

Your child’s tics can be very subtle at first, almost as if they are having fun using their body in fun ways. But over time, you will see more pronounced tics and your child is not trying to do the movements. Over time, the tics can begin to disrupt a child’s daily life.

11 – Other neurological conditions at the same time

If your child already has a neurological condition, he could develop TS along with it. Conditions that go hand in hand with Tourette syndrome include the following:

The first signs of TS are difficult to read, but they usually start on your child’s head, neck, or arms. They can start as:

Studies show that Tourette syndrome has genetic components. Recently, researchers have found structural changes in two genes associated with TS. As these researchers move toward understanding the biology of the disorder, they will be able to find treatments to help children affected by TS.

Early Tourette syndrome is 3 to 4 times more common in boys than girls. It is often more serious in children as well. It is not fully understood why this is so.

It is difficult to know if your child has Tourette syndrome or an allergy that is causing him to sniff, blink, cough, and clear his throat. If you notice these symptoms, take your child to the pediatrician to be checked for allergies. Many children spend years seeing allergists and pulmonologists only to find out they have Tourette syndrome.

Experts agree that stress and anxiety worsen TS symptoms. You may notice that the tics are most pronounced on your daughter’s first day of school or before your son’s basketball game.

Children are known to ask for things over and over again. You can attribute the fact that your child repeats and imitates you or your family members as childish behavior, especially if they are very young. Children with TS often ask to hear something over and over and then repeat it over and over.

Your child may have more than one or more tics that occur simultaneously or one after the other, such as blinking and then shrugging or humming and then screaming.

19 – Tourette syndrome can appear in babies

You will notice behavior that your child seems to be doing on purpose, such as

Just like anxiety and arousal trigger tics, when your child is overly tired, you may notice that he has more pronounced tics. This can be alarming to a parent upon realizing that these movements are involuntary.

Can my child stop the tics?

Studies show that although Tourette syndrome is involuntary, sometimes patients can suppress or hide their tics to reduce the impact. That said, tics can be made worse by the stress of trying to suppress them. Never try to force your child to stop these behaviors.

What should you do?

Relaxation techniques and behavioral treatments, such as awareness training, have been successful in patients with TS. Recent studies found that training patients to move when they feel the need for a tic can help reduce the symptom. Biofeedback and counseling can also be helpful.

Final Thoughts on the Diagnosis of Tourette Syndrome in Your Child

As a parent, you want your child to feel healthy and happy. Because you know your child best, you are the best person to notice symptoms and advocate for them.

If you suspect that your child may have Tourette syndrome, make an appointment with your pediatrician right away. They can help make an accurate diagnosis and find the best treatment for your child. The earlier your child is diagnosed, the better, as there are many treatments that can give your child the normal, happy life that you want for him.

Oils to Use When Doing the LOC or LCO Method